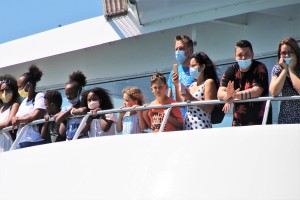 However, across the globe, there has been an increase in the number of reported cases of COVID-19, especially in Europe and the Americas. And WHO noted on October 12  that each of the last four days had been the highest number of cases reported so far. Many cities and countries are also reporting an increase in hospitalizations and intensive care bed occupancy.

There has been some discussion recently about the concept of reaching so-called “herd immunity” by letting the virus spread. Herd immunity is a concept used for vaccination, in which a population can be protected from a certain virus if a threshold of vaccination is reached. For example, herd immunity against measles requires about 95% of a population to be vaccinated. The remaining 5% will be protected by the fact that measles will not spread among those who are vaccinated. For polio, the threshold is about 80%.

Measles, mumps, polio, and chickenpox are examples of infectious diseases that were once very common but are now rare  because vaccines helped to establish herd immunity. In other words, herd immunity was achieved by protecting people from a virus, not by exposing them to it.

However, viruses such as the flu mutate over time, and therefore antibodies from a previous infection provide protection for only a short period of time. There are reports that suggest that if SARS-CoV-2, the virus that causes COVID-19, is like flu, then perhaps  people who get infected will be immune only for months to years, but probably not their entire lives.

“Never in the history of public health has herd immunity been used as a strategy for responding to an outbreak, let alone a pandemic. It is scientifically and ethically problematic,’ WHO Director-General Dr.Tedros Adhanom Ghebreyesus, told media persons last night.  He explained that there was not enough knowledge about immunity to COVID-19 and most people who got infected with the virus that causes COVID-19 developed an immune response within the first few weeks, “but we don’t know how strong or lasting that immune response is, or how it differs for different people. We have some clues, but we don’t have the complete picture”.

Letting the virus circulate unchecked therefore means allowing unnecessary infections, suffering and death. And although older people and those with underlying conditions are most at risk of severe disease and death, they are not the only ones at risk. People of all ages have died.

“…we’re only beginning to understand the long-term health impacts among people with COVID-19. I have met with patient groups suffering with what is now being described as “Long COVID” to understand their suffering and needs so we can advance research and rehabilitation. Allowing a dangerous virus that we don’t fully understand to run free is simply unethical. It’s not an option. But we do have many options. There are many things that countries can do and are doing to control transmission and save lives,” he said.

According to Dr. Ghebreyesus, it is not a choice between letting the virus run free and shutting down our societies. “This virus transmits mainly between close contacts and causes outbreaks that can be controlled by implementing targeted measures,” he said. He reiterated: “Prevent amplifying events. Protect the vulnerable. Empower, educate and engage communities. And persist with the same tools that we have been advocating since day one: find, isolate, test and care for cases, and trace and quarantine their contacts. This is what countries are proving works, every day.”

The WHO chief said that digital technologies were helping to make these tried-and-tested public health tools even more effective, such as mobile applications to support contact tracing efforts. He noted that Germany’s Corona-Warn app had been used to transmit 1.2 million test results from labs to users in its first 100 days. And the Aarogya Setu app from India had been downloaded by 150 million users, and had helped city public health departments to identify areas where clusters could be anticipated and expand testing in a targeted way. In Denmark too, more than 2700 people have been tested for COVID-19 as a result of notifications received through a mobile application; and the United Kingdom had rolled out a new version of its NHS COVID-19 app, which had more than 10 million downloads within the first week. As well as alerting users that they may have been exposed to a positive COVID-19 case, the app allows users to book a test and receive results, keep track of the places they’ve visited and receive the latest advice on local restrictions.

Ghebreyesus informed that the WHO was working with the European Centre for Disease Prevention and Control to help countries evaluate the effectiveness of their digital contact tracing apps.

He said this was just one example of the innovative measures countries are taking to control COVID-19. “There are many tools at our disposal: WHO recommends case finding, isolation, testing, compassionate care, contact tracing, quarantine, physical distancing, hand hygiene, masks, respiratory etiquette, ventilation, avoiding crowds and more,” he said.

WHO stated it was hopeful that countries will use targeted interventions where and when needed, based on the local situation. “There are no shortcuts, and no silver bullets. The answer is a comprehensive approach, using every tool in the toolbox. This is not theory: countries have done it and are doing it today, successfully,” Ghebreyesus said.

For every country that is experiencing an increase, there are many others that have successfully prevented or controlled widespread transmission with proven measures. Those measures continue to be our best defence against COVID-19.