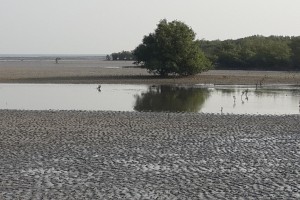 Travel With Me Series

The Sea beckons, come to me – walk into me!

I always had this fantasy of wanting to walk into the sea…it became an obsession of sorts. For years I have had to satisfy this urge by merely splashing near the beaches and wading into waist deep gentle waves, but the fantasy of walking into the sea had become a figment of imagination.

My wife and I are intrepid travellers, road trekkers in the self-drive mode. It was during our 2nd Khoj India road trip we were driving by in beautiful Kutch in Gujarat. Yet another old habit of ours is to stop at Roadside Shanties (Dhabhas) for refreshment and small talk with the local people – reliable source of un-adulterated; non touristy promotional sales pitch.

Over a cup of kadak chai (strong tea) we asked the stall owner “idhar koi anokhi jagah hai dekhne ke liye” (is there any place closeby which is extra-ordinary?)

He thought briefly and asked “aapko kya dekhna mangta – samundar chalega?’ My wife and I, we looked at each other and said “Samundar”? – Almost simultaneously. All he said was “aisa samundar aapne kabhi nahi dekha hoga”; (you may not have ever seen this type of Sea}, I made the mistake of saying aisa kya?, kya khubi hai is samundar ki”( Is it so, what is so special of this Sea?)

His reply was not only challenging but intriguing too…”jaoge to dekhoge, dekhoge to janoge, phir laut ke bhi aaoge ” (if you go there then you can see for yourself; when you see you will know and understand; you will come back again!!

“Sambhal ke jana samundar mein…kaafi samundar ke andar chalna padta hai” was his parting advise!! (go carefully, you will have to do a lot of walking into the Sea)

We were sufficiently intrigued, excited, concerned but highly enthused to go there. Each kilometre of the 20 odd Kms was full of mixed feelings, on one side was my dream fantasy and on the other safety and security and the fear of the unknown – some place we had never heard about. This was the signage which welcomed us to Narara Marine National Park, the first of its kind in the world.

After parking and securing our vehicle, we reached the Information Centre of the Forest Department and were told that the Low tide has just commenced and we have about 3.5 hours to walk into the Sea, see the Marine Bounty and return safely.

We obtained the necessary permits by showing our Identity proof, paying the nominal entry charges. An authorised (trained, knowledgeable local naturalist) was assigned to us. Taking an authorised Guide is a must and the charge for this is paid to him directly on return.

The formalities, depending on the number of visitors, takes as much as 10 minutes, parking is in plenty and then you are ready for your Sea Walk!

Faint reflections of the Sun rise at Narara For me, it was certainly a dream come true!! But we had absolutely no idea what we had gotten into; my wife was concerned and very cautious initially. I guess she was kind of sad to muddy her footwear and kept repeating, I’ll get wet… I do not have a change of clothes and so on…

These mesmerising images literally turned the tide for us and we charged ahead. Our enchanting morning walk in the Sea and the Mangroves Mangroves are a tree or shrub which grows in tidal, chiefly tropical, coastal swamps saline or brackish water, having numerous tangled roots that grow above ground and form dense thickets as foundations of unique ecosystems!

Walk through them, on weather beaten paths, till you surge through your mystifying journey into the Sea. Leave your footprints on the sands of time; they will remain immortal till the next tide comes in.

Mangroves can be as tall as a tree, may be defiance to the mighty Sea All this while, you can see the rising sun, a spectacular sight since you are standing in the sea. The most unique thing about this National Park is the fact that it is located in between two huge refineries! You can also see the big tankers downloading crude oil which is pumped directly to the refinery by underground cables sparing the fragile eco-system.

You can’t help but recognize the bounty of Mother Nature and its eco-system that uncovers this creation just for a few hours each day. Rest of the time it remains fully submerged. It has its own sacred ways to preserve the treasures of the marine wild life.

We have seen 100s of school children accompanying their teachers on field trips for experiential learning. I am sure that they go back with deep respect and affection for nature, wildlife and Sea. I suppose they are, being the future, better off with such exposure.

Have you ever held a live Octopus in the palm of your hands…and that too standing in the middle of the Sea?

Typical answers we get: Are you mad? Don’t be silly, this is impossible….impossible???

Yes, you can make it happen at Narara Marine National Park! The Octopus and its uniqueness

Octopuses are a family of cephalopods (a subgroup of marine invertebrates) known for their intelligence, their uncanny ability to blend into their surroundings, their unique style of locomotion, and their ability to squirt ink. Unlike two other cephalopods, cuttlefish and squids that have eight arms and two tentacles, most octopuses have eight arms and no tentacles.They lack shell but have three hearts. They are some of the most fascinating creatures in the sea, found in every ocean in the world, and every continent’s coastal waters. If you found this mesmerising and thrilling, wait till you meet the Dhokebaj (Cheater)!

Puffer fish, also called Blow fish, Balloon fish and Sugar toad, has enough toxins to kill 30 adult humans, and there is no known antidote! Just to mention that tetrodotoxin is up to 1,200 times more poisonous than cyanide! This fish is called puffer for the puffing sound it makes. It can remain out of water for about an hour. Of course, It is a highly prized dish that is prepared by specially trained, licensed chefs. Very few Chefs actually know which part of puffer fish to cook and which to discard.

The Marine National Park is a treasure trove of Marine Wildlife, Corals, and Artefacts

Let me introduce to you what all we could see, touch, smell, feel and above all admire!!

Crabs can communicate by drumming or waving their pincers. They tend to be aggressive towards one another, and males often fight to gain access to females. On rocky seashores, they also fight over hiding holes. But they are also known to work together to provide food and protection for their family, and find comfortable spot for females to lay eggs. While many crabs grow on a mixed diet of plant and animal, some species are more “specialised” in their diets – Some eat plankton, some eat primarily shellfish such as clams, and some even catch fish.

Cranes, make the longest distance migrations. They have high site fidelity for both their wintering and breeding areas and they make use of the same sites year after year.

So what else do I get to see?

Corals, Reefs, Fossils, many others if you are lucky Prehistoric artefacts, archaeological treasures…which you see and leave behind! Footwears of the unfortunate few who did not pay heed to the rules …now missing! Missing time capsule of the last alien spaceship…or something like that based on your imagination!

Hope you have had a good and interesting journey with us and made up your mind to visit this enhanting place soon. This is not a goodbye, it is so long and see you soon! This exhilarting place and its experience is a fantacy come true.  No description can do proper justice…it has to be felt.

In our case, we have been there twice and can and will return again and again as Dil Mange More.

Narara National Marine Park, how to get there from Jamnagar?

Do NOT venture out on your own under any circumstances; it is unlawful and very dangerous too

*Shiv as he is popularly called is an intrepid traveler, road trekker, adventure and wildlife enthusiast, and a keen photographer. He and his wife Mukta as navigator, have self-driven more than 104,000 Kilometers on Indian Roads as a part of Khoj India Series 1 to 6. He has 37+ years of management consulting and people development.

©All photo credits, unless mentioned otherwise belong to P Shivanand

3 thoughts on “The fascinating world of sea creatures at the world’s largest shallow-water marine park!”