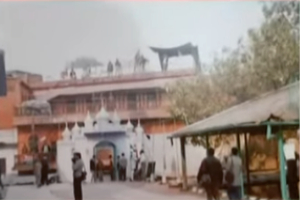 A Gyanvapi mosque type of situation also emerges in Karnataka

Varanasi/Bengaluru: A Varanasi court today ordered the sealing of a portion of the Gyanvapi Mosque constructed by Aurangzeb in 1669,  after the plaintiffs claimed that a “Shivling” was found in its ablution water tank during the videography survey of the mosque complex.  The caretakers of the mosque claimed it was not a “Shivling” but a part of a stone fountain in the wazu khana (ablution tank), which has now been sealed and water drained out.

The mosque stands adjacent to the Kashi Vishwanath temple in Varanasi. The survey was conducted by the two court-appointed commissioners, Vishal Kumar Singh and Ajay Mishra, and a videography survey was done following the court order. The survey got completed today amidst heavy police bandobast.

A bench of Justices DY Chandrachud and PS Narasimha are scheduled to hear the plea of the Gyanvapi mosque management against the survey of the Gyanvapi-Shringar Gauri complex in the Supreme Court tomorrow.

Rajya Sabha member and a senior Bharatiya Janata Party leader Dr Subramanian Swamy tweeted: “With the discovery of idols in Gyanvapi Masjid, the stage is set for Hindu—Muslim compromise: Best is that Masjid be rebuilt elsewhere and Gyani Vapi Vishwanath Temple be restored to its ancient site. We have an Aurangzeb firman to prove that the Mandir was demolished on his orders.”

Meanwhile, a Gyanvapi type of situation is emerging in Karnataka with the Narendra Modi Vichar Manch seeking permission to conduct puja and prayers at the Jamia Masjid mosque in Srirangapatna, the erstwhile capital of ruler Tipu Sultan — about 20 km from Mysuru.

The Manch has also asked the Karnataka government to stop the Archaeological Survey of India (ASI), under which the mosque comes, from allowing the site to be used as a prayer hall by a section of the community. A petition to this effect has been submitted by the office-bearers to the Mandya deputy commissioner.

The Manch has also sought permission to offer puja at the mosque and the supporters held a sit-in protest in front of the mosque.

According to the Manch, the mosque was built where a Hanuman temple once stood. They further said Hindu deities are still inside Jamia Masjid and that regular pujas and prayers should be resumed.

The activists alleged that Tipu destroyed a Hanuman temple and built the masjid. This is well documented in many books. They claimed that Tipu had written a letter to a ruler in Persia admitting it. The masjid has Hindu inscriptions on its pillars and walls, they said in support of their argument.

According to media reports, Manch state secretary CT Manjunath said the district administration must allow Hindus to offer puja to the Hindu deities at the masjid since there’s “documented evidence of a temple existing earlier”.

However, according to a  Persian inscription found inside the masjid, Tipu Sultan is said to have built the mosque around 1782. Two minarets were used as watchtowers during his reign.

About 36,000 temples were demolished or damaged during the Mughal rule in India. “Without creating any trouble, we will reclaim all of them in accordance with Supreme Court’s guidelines,” he said.

– with inputs from global bihari bureau in Varanasi/New Delhi