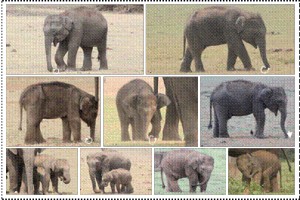 Asian elephant calves offer an interesting system to study the development of behaviour. They are born with a well-developed sensory system technically called precocial and are capable of locomotion hours after birth. However, they are dependent on their mothers for nutrition, physical protection, and social support for a prolonged period, allowing them ample time and opportunity to learn and perfect the skills necessary for independent survival. The calves can walk soon after birth but are incapable of using their trunk to pick up objects and pull grass.

Trying to probe the peculiarity of behaviour of elephants which stands out against many precocial species, researchers from Jawaharlal Nehru Centre for Advanced Scientific Research (JNCASR) an autonomous institute of the Department of Science and Technology, Government of India found that though their trunks take time to develop adult-like usage, they develop handedness (right or left-side bias) in trunk usage quite early. The study was published recently in the ‘International Journal of Developmental Biology’.

The team of researchers observed 30 unique calves from 11 distinct clans (female social groups) in Kabini Elephant Project in Nagarahole and Bandipur National Parks from December 2015 to December 2017 to look at the development of trunk motor control, laterality — or side preference/handedness — in trunk usage, and various social and non-social behaviours. They found that whereas calves took about 6 months to achieve fine motor control of the trunk to pluck grass in an adult-like manner, even young calves — those below 3 months of age — showed handedness (right or left-side bias) in trunk usage. It suggests that such handedness might be innate in Asian elephants. This would be analogous to human infants showing right-handedness or left-handedness soon after birth.

In humans, the early expression of hand-preference and consistency in handedness have been linked to advanced language skills. The researchers plan to study if there is any advantage to having an early emergence of trunk laterality.

The JNCASR team also identified 81 unique calf behaviours and classified them based on their level of adeptness in expression. It was observed that as calves grew, they spent less time resting and more time feeding. Resting-related behaviours and certain grooming behaviours and, many social and exploration related behaviours were expressed by calves in adult-like adeptness from a young age, whereas behaviours that required trunk usage, such as feeding, developed gradually and were elaborately expressed when trunk motor control was sufficiently achieved (6-9 months). The researchers described the ontogeny of behaviour in Asian elephant calves for the first time in the wild.

The team also looked at mother-calf synchrony in behaviours. Since adults spend most of their waking hours in feeding but not the calves, mother-calf behavioural synchrony during the initial few months of a calf was low; however, as calves began to develop trunk motor trunk and reduced the time spent in resting, mother-calf behavioural synchrony steadily increased. Behavioural synchrony is necessary for two individuals to maintain cohesiveness, and, by extension, it is necessary for a set of individuals to remain as a group. This, along with a calf’s need for physical protection, leads to instances when mother and/ or calves take an active effort to synchronise their behaviours. As the physiological needs of a young calf that is growing up are starkly different from that of its mother, often their behavioural categories do not match; nevertheless, they almost always maintain close physical distance, the study pointed out.