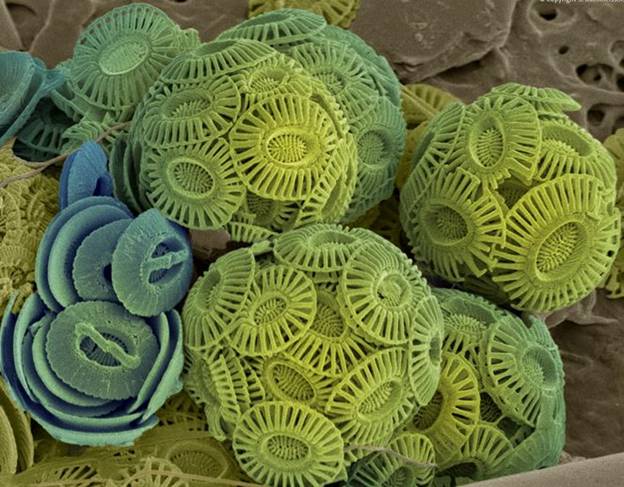 New Delhi: A study of a microscopic ancient marine algae (Coccolithophores) led by the National Centre for Polar and Ocean Research (NCPOR) has found that there is a decrease in the concentration of oceanic calcium carbonate (CaCO3) in the Southern Indian ocean. This decrease in CaCO3 is attributed to the increase in the concentration of another single-celled algae known as diatoms. This, in turn, will affect the growth and skeleton structure of coccolithophores, with potential significance for the world ocean ecosystem.

Coccolithophores are single-celled algae living in the upper layers of the world’s oceans. They have been playing a key role in marine ecosystems and the global carbon cycle for millions of years. Coccolithophores calcify marine phytoplankton that produces up to 40% of open ocean calcium carbonate and responsible for 20% of the global net marine primary productivity.

Coccolithophores build exoskeletons from individual CaCO3 plates consisting of chalk and seashells building the tiny plates on their exterior. Though carbon dioxide is produced during the formation of these plates, coccolithophores help in removing it from the atmosphere and ocean by consuming it during photosynthesis. At equilibrium, coccolithophores absorb more carbon dioxide than they produce, which is beneficial for the ocean ecosystem.

NCPOR, the National Institute of Oceanography (NIO), and the Goa University revealed that abundance and diversity enrichment of coccolithophores in the southern Indian Ocean is highly dependent on time and influenced by various environmental factors such as silicate concentrations, calcium carbonate concentration, diatom abundance, light intensity and availability of macro and possibly micronutrient concentrations.

The research team’s analysis revealed that the reduction of coccolithophore diversity in the early summer and late summer periods is due to an increase in the presence of diatom algae, which occurs after sea ice breakdown with climate change and ocean acidification, and increases the silicate concentration in the waters of the Southern Ocean. The scientists also analyzed the maximum coccolithophore diversity during mid-summer in the Subtropical Zone (STZ) and Sub-Antarctic Zone (SAZ), which is controlled by elevated silicate, low temperature, and low salinity conditions.

Scientists found that the biogeographic boundaries of coccolithophores in the southern Indian Ocean are highly variable, controlled by environmental factors in early and mid-austral summer, and grazing pressure in late austral summer. Also, physical forcing may play an important role in the transport of coccoliths and coccospheres at high latitudes, indicating that the southward extension of coccolithophores is important and may occur for short periods during hot summer.

The results of the study point to climate change as a major reason for the altered coccolithophore calcification rate. Different environmental factors and the ability of the species to adapt to those environmental changes would ultimately determine the future coccolithophore calcite production. These investigations are important for future intervention to bring positive changes in the marine ecosystem and global carbon cycle.

Led by Shramik M. Patil, the research team comprised Sathish Rahul Mohan and Sahina Gazi, of NCPOR, Ministry of Earth Sciences, Goa, and Suhas S. Shetye of NIO, and Pallavi Choudhari of the Goa University. The research paper has been published in the Journal of Deep-Sea Research Part II.

*The writer is a scientist at Vigyan Prasar Science Portal.