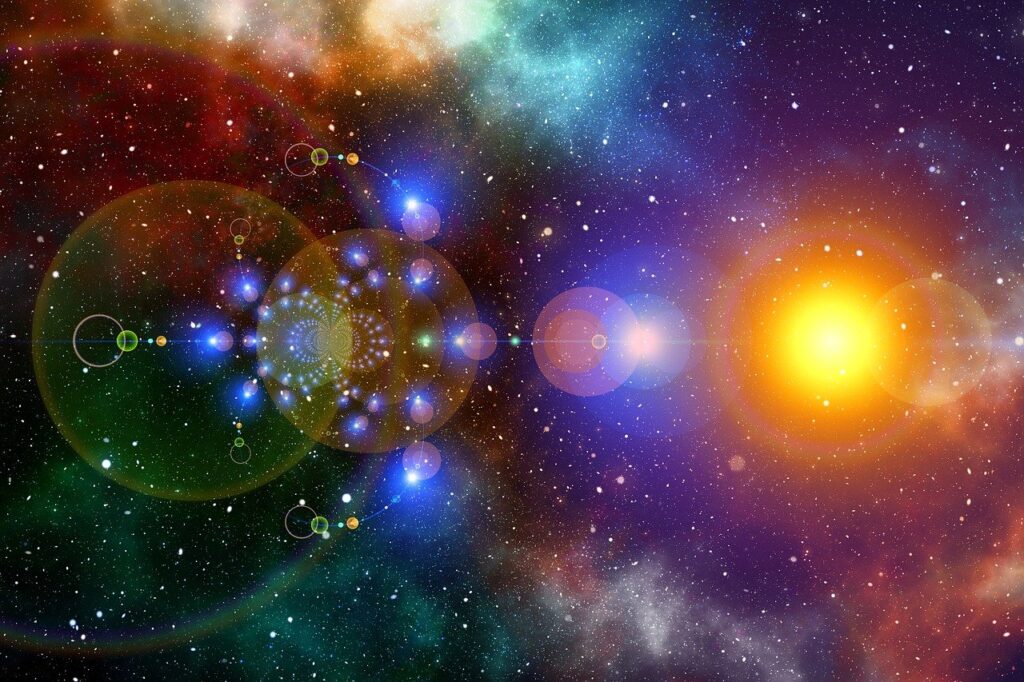 The sun is still and it has a superimposition of movement. Similarly, the faraway stars are moving; however, because they are extremely far, they seem still. In this manner, it is also likely that a moving object is believed to be still.

Something similar to this is for ātmā and anātmā also. Ātmā is still, without movement and therefore, moving karma cannot be in ātmā. Karma is in the upādhi (body-mind-sense complex), anātmā. Upādhi (superimposition) is vikārī (modifiable), movable and all the karmas are in there only. Intellect, mind, senses and body are all changeable and therefore, they can be the substratum of all karma. This discussion was in chapter 3 where Bhagavān says that all the karmas are performed due to the modification of nature; however, the one whose mind is deluded due to ahaṅkāra thinks of ātmā as the doer. Thus, the attributes of anātmā are naturally superimposed on the ātmā. People are under the illusion that ātmā is the doer and enjoyer and nobody knows that this is a delusion. Scientists found out that the earth is revolving around the sun. Before that, everyone believed that the sun was revolving around the earth and they did not have the knowledge that it was an illusion.

No, the use of ‘karmama’ and ‘akarmama’ is from the 7th case however, its meaning should be according to the 2nd. That means a wise person sees a karma as akarma which is seen as karma due to indiscrimination. Ātmā is believed to be the one performing karma, meaning, the doer. (The example of the sun was given to explain that.) The wise person sees ātmā as a non-doer. He sees that karma is in the upādhi, the doer-ship is in the intellect. Therefore, due to the discrimination of ātmā and anātmā, the jñānī knows that ātmā is a non-doer, unchanging and in its presence anātmā which means the upādhi is doing all the karmas.

In a way, jñānī sees akarma in karma. How is that?

Where ajñānī sees akarma in delusion, jñānī sees karma. When upādhi’s activity stops, it becomes still, inactive, indiscriminate and says, “I do not do any karma.” However, it is also the nature of upādhi not to do anything and by superimposing that inaction of upādhi on ātmā, he says, “’I’ do not do anything”. That is also delusion, a karma. (The example of stars was given for this.)

Think of a path with a slope and someone is driving his car on it. It is the nature of the car to trundle on the slope without any effort. If we want to stop the car on a sloped path, we have to put on the brakes. Someone looking at this car on the slope might think that there is no motion or effort there. However, there is an effort of the brake to stop the car which has a nature to run. In that manner, there is also an effort in making upādhi inactive whose nature is movement. Body, senses, mind etc. are all dynamic and there is an effort in keeping them still. Therefore, in the seeming inaction of upādhi, actually, there is an effort to keep it from the activity which is akarma. It is said that in this akarma, inaction, one should see karma.

The reality is that action and inaction both are the characteristics of upādhi and ātmā is free from them both. In this manner, the one who knows ātmā is intelligent, yogi, and ever-satisfied.

*Swami Viditātmānand Saraswati has been teaching Vedānta Prasthānatrayī and Prakaraṇagranthas for the last 40 years in Ahmedabad, Gujarat. Throughout the year, he conducts daily Vedānta discourses, accompanied by retreats, and Jñāna Yajñas on Vedānta in different cities in India and in foreign countries.