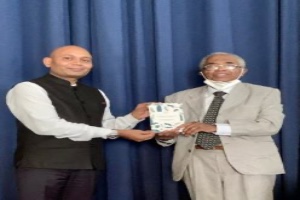 Antananarivo: Madagascar’s greatest poet Jean Joseph Rabearivelo is considered Africa’s first modern poet. He was inspired by poetry of Rabindranath Tagore and had mentioned him in poem no. 15 in his poetry collection titled Translated from the Night.

Moreover, a study published in 1951 titled The etymological dictionary of Malagasy language by a Malagasy scholar Dma-Ntsoha listed about 300 words from Sanskrit in Malagasy language and emphasised on the need of greater cultural, literary and academic exchange between India and Madagascar, the two maritime neighbours in the Indian Ocean connected by Monsoon.

This was disclosed by India’s Ambassador to Madagascar and Comoros, Abhay Kumar, while addressing a special session of Malagasy Academy on how to strengthen cultural and academic connections between India and Madagascar, here recently.

Madagascar has a rich oral literature that is expressed in Hainteny ( art of words), Kabary (art of speech) and Ohobolana (proverbs). The Ambassador also met François Rajaoson, the President of the Malagasy Academy, and presented his haiku collection La Magie de Madagascar|The Magic of Madagascar to the latter.

Recently the Embassy of India, Madagascar had organised the first ever joint reading between Indian and Malagasy poets at its monthly programme LaLitTana and plans to organise more such interactions in the future. Earlier 100 Great Indian Poems from over two dozen languages covering a period of over 3000 years of Indian poetry was translated and published in Malagasy in 2020, making Indian poetry available in Malagasy language.