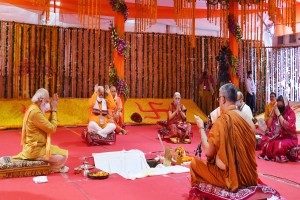 Hinduism historically has had an “inclusive nature” and it may broadly be described as a way of life and nothing more. The Bhoomi Pujan at Ayodhya establishes the same where 135 different religious leaders stood together under one roof.

However, when it comes to India, the Intelligentsias/sympathizers/fifth columnists raise concerns over anything associated with the word “Hindu”. The word itself has become political — to score brownie points against each other in the political arena.

I fail to understand as to why Hinduism can’t be embraced as popular way in India?  Why the world only remembers Myanmar, Palestine, Yemen etc.? Why it does not raise voices against atrocities on Hindus, Buddhist, Sikhs in countries such as Pakistan, Afghanistan etc.?

Indian civilization needs no introduction of it being the original homeland sheltering 95% of all the Hindus in the world and Sanatan philosophy evolved since time immemorial. All faiths have flourished here including Parsis, Jains, Sikhs, Buddhism, Muslims, Christianity, Zoroastrians etc.

Here I wish to point out that the iconoclastic crusades (religiously or politically motivated) between Christians and Muslims during 11th -14th centuries witnessed destruction of sacred places of each other still exist in Western Europe and Middle East . The Church of Hagia Sophia (Byzantine ) in Constantinople, converted into a Mosque recently by Turkey’s autocratic Erdogan is a classic example of iconoclastic history.

Now some politically motivated opportunists are still instigating converting the upcoming temple at Ayodhya into a Mosque in future ‘on the lines of Hagia Sophia’, and hence this claim- “It was, is and will be a Babri mosque”! But they don’t represent the larger Muslim community which understands and appreciates that the issue was not worth losing time and lives any more.

An India that values secularism through its very nature of practice, should be seen as an example to the world. Ram and Ayodhya are greatest unifiers of India.  Renowned Socialist leader of the last century, Ram Manohar Lohia, used to say that Ram, Krishna and Shiv signify India’s civilizational identity. “You just stand outside a temple in Rameswaram in the South or Badrinath in the North; you will find Hindustan there,” he used to say.

Ayodhya is a sacred place for Hindus, Buddhists, Sikhs and Jains. Ram is revered for his supreme human qualities by millions of others irrespective of religion. The only message that Ayodhya emanates is about that larger unity and goodwill among the people. Swamy Chinmayananda, founder of the Chinmaya Mission gave a unique definition to Ayodhya. “Ayodhya – the word itself means – Ayuddha – that is, non-war or peace. It is for Ayuddha (no conflict) that we are fighting. Just as the World War was for peace, we are no doubt fighting, but only for establishing peace and progress in our country”, he used to say.

Demographically Hinduism, which is the world’s third largest religion after Christianity and Islam is not as widely as spread as the other two.  97% of total world’s Hindu population live in India, Mauritius and Nepal. A good reason for this is that India never invaded any country in her 10000 years of history.  It is time that Hindus proclaim the peace they inherit. It is time now that India take the lead in spreading the inherent message of peace –

This is the fructification of Yoga which leads to the union of individual consciousness with that of the Universal Consciousness, indicating a perfect harmony between the mind and body, man and nature. This is now also recognised by the United Nations, and is now increasingly being practiced by masses elsewhere in the world.

*The writer is a Guwahati-based social entrepreneur working towards drawing public attention on United Nations’ Sustainable Development Goals in India. The views published here are personal.