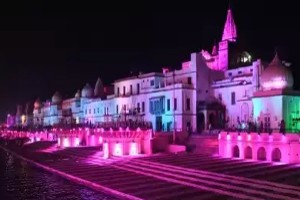 As per the earlier schedule, Prime Minister Narendra Modi will attend the public function on laying of the Foundation Stone of ‘Shree Ram Janmabhoomi Mandir’ at Ayodhya tomorrow, August 5, the Prime Minister’s Office stated here on Tuesday.

In all 175 eminent guests, including 135 seers have been invited for the ceremony. Pious Soil and water from all the major religious sites, places of national importance and sacred rivers of the nation have been brought to Ayodhya for the construction of the temple at Shri Ramjanmbhoomi.