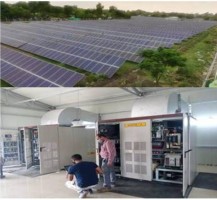 Pilot project in Bina to get operationalised “soon”

New Delhi: In its endeavour to be self-reliant for its energy needs, the Ministry of Railways would install solar power plants on its vacant unused lands on mega scale. Announcing this on Monday, the Railways ministry stated that it expected its present demand to be fulfilled by the solar projects, “making it the first transport organisation to be energy self-sufficient…(and) green…”.

Besides, one project of 1.7 MWp at Bina (Madhya Pradesh) which would  be connected directly to Overhead Traction System had already been installed and was presently under extensive testing.

“It is likely to be commissioned within 15 days,” the ministry stated, adding that this would be the first of its kind project in the world commissioned by Indian Railways in collaboration with Bharat Heavy Electricals Limited (BHEL) which involves adoption of innovative technology for converting Direct Current (DC) to single phase Alternating Current (AC) for feeding directly to Railway’s overhead traction system.

The solar power plant had been established near the Bina Traction Sub Station (TSS) and could produce approximately 25 lakh units of energy annually. “This will save around INR 1.37 Crore for Railway every year,” the ministry stated. The project was undertaken by BHEL under its Corporate Social Responsibility (CSR) scheme and despite the COVID-19 lockdown, this mission was accomplished in just 8 months from the date of signing of the agreement on October 9, 2019.

The ministry said the key challenge in this project was the conversion of DC power generated from solar panels to the single phase 25 KV AC power which was used by the Railways traction system. This required the development of high capacity inverters with single phase output which were not readily available in the market. The solar panels generate DC energy which would be converted into AC energy through these “unique” inverters and stepped up to 25 kV AC -1 ϕ through the transformer to directly feed power to the BINA TSS which would be used for running of electric trains.

In addition to this, two pilot projects for the scheme of land based solar plants for meeting electric traction energy requirements of Indian Railways were also under implementation — A 50 MWp solar power plant on vacant unused land at Bhilai (Chhattisgarh) which shall be connected with Central Transmission Utility (CTU) and is targeted to be commissioned before 31st March, 2021; and .the 2 MWp solar plant at Diwana (Haryana) which shall be connected to State Transmission utility (STU) is expected to be commissioned before 31st August, 2020.

Besides, Railway Energy Management Company Ltd. (REMCL) had already floated tenders for 2 GW of solar projects for Railways to be installed on unutilised railway lands. Indian Railways is also adopting an innovative concept of installation of solar projects along operational railway lines. “This will help in preventing encroachment, enhancing the speed and safety of trains and reduction of infrastructure costs due to direct injection of solar power into the traction network. Another tender for installation of 1 GW solar plants along Railway tracks is also planned to be released soon by REMCL,” the ministry stated.

“With these mega initiatives, Indian Railways is leading India’s fight against climate challenge and is taking significant steps towards meeting its ambitious goal of being a net zero carbon emissions organisation and meeting India’s Intended Nationally Determined Contributions (INDC) targets,” the ministry stated.