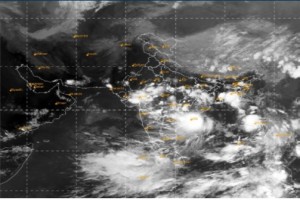 New Delhi: Cyclonic storm ‘Gulab’ is likely to cross north Andhra Pradesh – South Odisha coasts between Kalingapatnam and Gopalpur, about 25 km to the north of Kalingapatnam as a cyclonic storm with maximum sustained wind speed of 75-85 kmph gusting to 95 Kmph during next 2-3 hours.

Tidal wave of about 0.5 m height above the astronomical tide is likely to inundate low lying areas of Srikakulam, Vizianagaram,Ganjam districts during the time of landfall.

As per the latest updates, the cyclonic storm lay centred at 1830 h0urs (IST) today over northwest and adjoining westcentral bay of bengal near latitude 18.4°n and longitude 84.5°e, about 40 km east-northeast of Kalingapattnum, 105 km south – southwest of Gopalpur. The system is lying close to coast and the centre is about 25 km to the east of the expected landfall point.

The cloud bands are entering the coastal regions and thus the landfall process, which commenced at around 1800 hrs ist, continues and will continue for next 2-3 hours over north coastal Andhra Pradesh and adjoining south coastal odisha.

A gradual and steady increase in wind speed is being recorded by the coastal stations of south
Odisha, since 1230 hours (IST). At 1730 hours IST, Puri reported a maximum wind speed of 31 kmph, followed by Gopalpur, 26 kmph. The cyclone is being monitored by doppler weather radar at vishakhapatnam as well as by the coastal meteorological observatories. Light to moderate rainfall in association with the inner bands of the system has commenced over south coastal Odisha and coastal Andhra Pradesh.