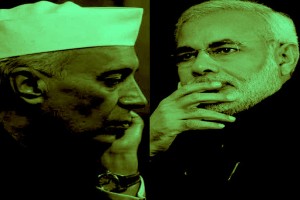 Modi is no Nehru. Ideologically they are poles apart and no one doubts this fact. Politically too, both, if one is allowed to use today’s lexicon, maintain more than do gaj kee doori !  And when it comes to religion, Nehru was a self-proclaimed atheist, while Modi is an uncompromising Hindu for whom his religious beliefs reign supreme. Ask former US President Barack Obama, who hosted a banquet for the visiting Indian Prime Minister in White House only find Modi taking just water as he was fasting during that period of Navaratri — an important Hindu festival that lasts nine nights.

To make it more clear, Modi was a pracharak of Rashtriya Swayamsevak Sangh — an organisation that once Nehru had banned and put around 25,000 of its activists behind bars after the assassination of Mahatma Gandhi!

Little surprise therefore that saffron has a much deeper meaning for a right-wing Modi than Nehru – a self-described scientific humanist,who rather preferred displaying his western rationalist character. Hence a temple obviously has a more intrinsic and religious value for Narendra Damodardas Modi, India’s 14th Prime Minister than Jawaharlal Nehru, Independent India’s first Prime Minister –When Nehru spoke about the temples of modern India, he meant national projects. Modi for the moment has the proposed Ram Mandir at Ayodhya in mind! He was conspicuously absent at Kakrapar this July 22 when the atomic power plant there celebrated a scientific milestone  but  he will be at Ayodhya on August 5 to lay the foundation stone for the Ram temple!

Modi knows that he is not just a part of the Saffron surge, but also its undisputed leader. To him and his followers, Hindu mythological legends are more important than Nehru’s western scientific temper. Of course it is this saffron surge that catapulted Modi to the helm of power, and he can never make any blunder by falling into a Nehru trap that his detractors demand. After all, Modi knows he is not here to repeat Nehru’s mistakes, but to “rectify” them.

Take it for sure that  Sangh parivar hates Nehru but equalling him as a PM is not as easy either. It is easier to denigrate Nehru on WhatsApp, but if Modi is really up to the challenge, he can start by rectifying the first PM’s mistakes.

Nehru built big dams, heavy industries, institutes of scholastic and scientific excellence, etc as the temples of modern India but his failures in public health and primary education are colossal. His elitist approach prevented the gains of freedom from reaching the poor. This explains why India ranks 129th out of 189 nations in the human development index despite all the scientific and industrial progress.

Modi can begin with spending more than just the measly one per cent of the GDP that the Congress-era governments did on public health. With COVID19, he has a historic opportunity. For starters, he can replicate the AIIMS, a Nehruvian temple, in every city and rename it the Atal/Advani Institute of Medical Research. After all, it is hospitals and not holy places that matter in a pandemic. Showering money rather than petals is the way to go about improving the public health infrastructure, as Kerala has shown.

Likewise, Nehru started the IITs but his report card on school education, in the words of Nobel laureate Amartya Sen, is, “lamentable”. Even today primary education is so low-priority and riddled with corruption that the food at the mid-day meal scheme designed to lure poor children to schools is often unfit for consumption.

Modi can increase the expenditure on education which is three per cent of the GDP. Instead, he is busy dismantling the JNU and the University Grants Commission, diluting the Indian Institute of Technology (IITs) and replacing academics of repute with `bhakts’. Matters reached such farcical limits that ministers who can’t show their own degree certificates were questioning the credentials of renowned scholars. And who can forget the Human Resources Development Ministry’s `institutes of eminence’ tag that included Jio Institute which was still a proposal.

It would seem as if Modi and the Sangh parivar are in a hurry to raze the Nehruvian temples and build their own on the ruins. But as a Senegalese proverb says it so aptly, haste and hurry can only bear children with many regrets along the way.

As for scientific temper, some mad cow disease has afflicted our research institutes. IIT-Delhi received several proposals from top research institutions to explore the benefits of panchagavya, a mixture of five cow products: urine, dung, milk, ghee and curd. And some members of an alumni association of the prestigious Indian Institute of Science, Bangalore, would have got away with a workshop on astrology at the institute had it not been for a public outcry.

What can one say when the Union Minister for Science and Technology claimed at a session of the Indian Science Congress that Stephen Hawking said that our Vedas might have a theory which is superior to Einstein’s theory of E=mc^2, only to later dodge queries on the source of the information. There was no documented evidence even that Hawking made any such statement! Peddling of such arrant nonsense and pseudoscience is what led to a nation-wide protest by scientists against “propagation of unscientific and obscurantist ideas”.

The PM though talks of promoting a scientific temper, now. If he means it he must increase India’s spending on science and technology, a paltry 0.8 per cent of the GDP.

Modi’s penchant for the grandiose are reflected in his decisions, which unfortunately at times display haste than proper planning. To name a few –  the unviable bullet train, the Char Dham highway project which environmentalists call a Himalayan blunder, the implausible garland canal project when the emphasis should be on potable water for all, the indiscreet Namami Gange river rejuvenation project, the extravagant Sardar Patel statue and the Central Vista project and the Smart City project in metros where the act of breathing itself is equivalent to smoking 20 cigarettes a day, where civic authorities are unable to find space for a garbage dump, where sewer workers routinely choke to death.

There is a Dutch proverb – It is hasty speed that doesn’t succeed.

If Narendra Modi really wants to better Jawaharlal Nehru then he needs to carefully focus on issues that continue to inflict Indians after so many years of Independence. He needs to build ‘temples’ that instill confidence and inculcate faith in our capabilities as a nation.

*Anil Singh is an independent journalist based in Mumbai. The views expressed are personal.