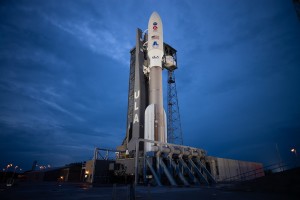 Florida: Was there once life on Mars? NASA’s Perseverance rover will aim to find it out! It will seek signs of ancient life and collect rock and soil samples for possible return to Earth.

For the first time a Mars Helicopter too is hitching a ride on the Perseverance rover.

On Thursday the new robotic astrobiologist launch would take place at 7.50 a.m. Eastern Daylight Time (5.20 p.m. Indian Standard Time) and the Perseverance atop United Launch Alliance’s Atlas V rocket would take off on a seven-month journey to the Red Planet.

The liftoff would be from Space Launch Complex 41 at Cape Canaveral Air Force Station in Florida and launching on board will be the most sophisticated set of tools ever sent to Mars, with the hope Perseverance will uncover the planet’s secrets.

It is expected to land at Jezero Crater in Mars on February 18, 2021. The mission duration is at least one Marsh year that is about 687 Earth days.