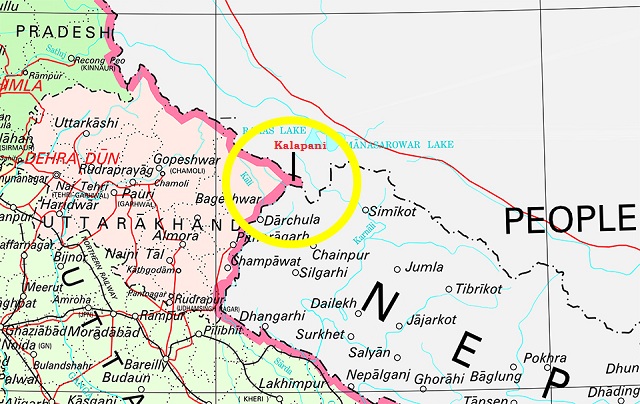 The Dispute over the road to Shiva’s abode The recent inauguration by the Defence Minister Rajnath Singh,  of a road measuring around 75 km which will shorten the time taken for Kailash Mansarovar by yatris has resulted in a public and diplomatic protest by  the Nepal Government, a new map by Nepal, and establishment of a Nepal Armed Police Force border outpost in Changru village district Darchula, Nepal.

Moreover, helicopters were used in a show of determination by the Nepal government owing to the terrain and lack of roads, to make a visible  point for  their citizens who had protested the road which they claimed was in the Nepalese territory.

The road in question is part of the age old route to Mount Kailash where Lord Shiva resides. The dispute is about the areas of  Lipulekh pass, Kalapani and Limpadhura that Nepal claims are its territories in which India has constructed this road.

This road is in the district of Pithoragarh, Uttarakhand which joins it’s Dharchula subdivision headquarters with the trijunction of the  Tibet and Nepal border at Lipulekh pass where one crosses over to Tibet . Across the pass is the Tibetan town of Taklakot where Indian traders have traditionally for long been doing local business. India and China have a formal agreement to this effect. In this sector this is one of the openings into Tibet. Lipulekh is reportedly described as “Randradhara” by Kalidasa in Meghadootam, as a gap in the mountains.

The genesis of the dispute lies in the interpretation of the Sugauli treaty of 1816 between East india Company (EIC) and the king of Nepal. The EIC and Nepal fought the Gorkha war between 1814 to 1816. Nepal prior to this acquired Garhwal and Kumaon and the western flank of Nepal was Kangra. In the Gorkha war, the armies of Patiala, Garhwal and Sikkim combined with the EIC to drive back the Nepal army resulting in the Sugauli treaty. The Western  boundary of Nepal was fixed as the eastern bank of the Kali river. The present  point of contention is differing opinion about the watershed of the Kali river. This difference of opinion goes back to 1962. India claims Kali river begins after all the tributaries meet, which is east of Lipulekh whereas Nepal  contends the Kali originates in Limpiadhura that lies west of Lipulekh.

The importance of  Lipulekh is strategic as it has historically linked this region to Tibet for trade and pilgrimage by Buddhists and Hindus to the Kailash Mansarovar.  The Indian government established an armed border outpost in Kalapani in the aftermath of 1962 apart from some more. Nepal had protested then too.  India had established 18 such posts all over but after negotiations removed all but the one at Kalapani.

Over the years at times surging violent Kali has changed course, mildly altering the border. The eastern border of Pithoragarh is  the Kali river which is the Indo-Nepal border. There were only two points of crossing in Jhulaghat and Dharchula. Incidentally the areas across these towns are known by the same name in Nepal too. But being far and difficult to communicate from Kathmandu they resembled the last outposts.

In 1857 the king of Nepal offered help to the EIC which was gladly accepted. Nepal troops played a large role in the recapture of Lucknow. After the war, the British government gave away a large part of Western Terai including Janakpur and Kapilvastu to Nepal in a subsidiary treaty. However the western boundary of Nepal was not changed and remained the Kali.

It would not be out of place to mention that building the road from Tawaghat to Lipulekh was a military necessity rather than to ease the arduous climb the pilgrims had to take to reach Kailash Mansarovar. This is an ancient route to Kailash and the most used till the yatra was stopped prior to hostilities and subsequently restarted in 1981.

As Superintendent of Police, Pithoragarh in the mid-eighties, I am familiar with the route and topography of the area. The reason this road remained a track was the earlier military thinking of  India about Chinese military intentions. The view was that on the Tibet plateau the heavy  military ordnance  can be brought up to Kalapani and if a road existed then the Chinese could drive right upto the foothills of Kumaon hardly a couple of hundred kilometers from Delhi. Since the last decade this has been militarily re-thought and now roads like this are being built all across the Indo China border. The road to Lipulekh that leads to Shiva’s abode is one of the many such roads being built in the region.

In  the mid-eighties and till much later, the Kailash Mansarovar yatris would spend their night in Dharchula, an Indian sub-divisional headquarters, engage ponies and porters, and start  trekking the next day from Tawaghat about 3 km from Dharchula . On the eastern flank of the river Kali in Dharchula was the Nepal district headquarters of Darchula of the Nepal Sudoor Paschim state. The trek was along the Kali on the west. The trek would go through Sirkha, Gala, Budhi, Malpa, Gunji , Kalapani, Nabidhang and finally Lipulekh.

Kalapani at around 10000 feet and then Lipulekh at more than 16000 feet were formidable climbs and the time. The window to cross the pass was limited. Mishaps invariably took place and during my tenure a the superintendent of of Police there, Prof. Yudhisthir died while coming back, getting caught in a very severe snowstorm in Lipulekh.  Much later almost 200 people including 50 pilgrims on the Kailash Mansarovar yatra including Protima Bedi died in a mountain collapse that decimated the Malpa village — the entire area falling into the Kali river.  The route was then changed.

It is this road that the Indian government has constructed primarily for security considerations. The Indo Tibetan Border Police maintains permanent all weather posts in this area and commands the Lipulekh from Kalapani by patrolling and through its physical presence. That the road eases the Kailash Mansarovar yatris by saving them time and an arduous and dangerous climb is just an icing on the cake.

The controversy is unlikely to die down given the neighbourhood and the problems of Nepal which is now politically Communist with a maoist K P Sharma Oli as the PM. There will be calls for a Greater Nepal and it is unlikely that this controversy stops.

*Anand Lal Banerjee is a former Director General of Police of Uttar Pradesh. He is an ex- Superintendent of Police of Pithoragarh