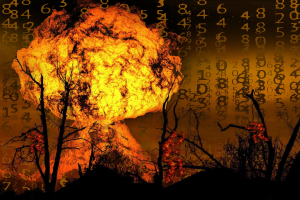 Why famine after the nuclear blast?

Nuclear blasts would cause not only devastating death and destruction on an unimaginable scale but also famine. They will vent millions of tonnes of soot into the atmosphere. This soot would block the Sun’s rays and cool the globe, leading to crop failure.

The research predicts that during a nuclear blast, anywhere between five million and 150 million tonnes of soot would be injected into the atmosphere affecting livestock, crops and fisheries. Ensuing famine might starve around 25 crore to 250 crore people within two years while killing about one-tenth of this figure immediately in a war between India and Pakistan. On the other side of the scale, a war between the US and Russia could kill 360 million people initially and starve a further five billion people in two years.

So nuclear explosions not only will contaminate soil and water close to the nuclear blast site turning it into the barren land, but they will also cause the smoke and soot to rise in the air and disperse globally, affecting the entire earth regardless of the warring nations. Nuclear war, therefore, converts a regional tussle into a global conflict.

The impact of the nuclear explosion can be studied by modelling studies and hence international experts have published a study based on a mathematical model to estimate the short-term and long-term effects of nuclear war on food and famine. Results were published in the journal ‘Nature Food‘ on August 16, 2022.

The team of researchers outlines six possible scenarios, each based on the kiloton(KT) capacity of a Nuclear Bomb Blast.

The mildest scenario represents a nuclear war between India and Pakistan, based on available information about their weapons stockpiled in 2008. On the other end of the scale – the largest nuclear war could be between the USA and Russia, with additional attacks on France, Germany, Japan, the UK, and China.

As per estimates, a “small” nuclear war could leave about 2.5 crore people dead initially and about 25 crore people without food in the following two years. On the other hand, a large regional conflict would jeopardise the food for two third of the global population, amounting to nearly 500 crores (five billion) human beings.

Australia would be a few places on earth to stay fed in such a scenario. Why So? Because it has enormous natural resources. It is the biggest food producer with low internal consumption. And secondly, it lies in the Southern Hemisphere, where nuclear blast’s impact would be minimal as most of the nuclear-capable states are located in the Northern Hemisphere.

Argentina and New Zealand also share similar advantages. However, assumptions and predictions aside, one thing is very clear. At present, there’s enough food in the world to feed everyone. Let’s not take it to a situation where there is not enough food for everyone.

*Dr Satish K Gupta is an MD in Medicines, a Visiting Senior Consultant Physician and Internist at Max Super Speciality Hospital, and a Clinical Assistant Professor at GS Medical College, Chaudhary Charan Singh University, Meerut. He is the author of Journey of COVID in India: A Doctor’s Perspective.