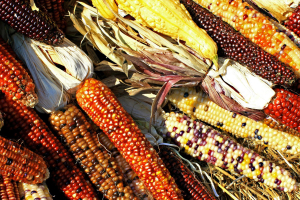 Rome: Global cereal production is anticipated to decline by 38.9 million tonnes, or 1.4 per cent, from the previous year, according to the new Cereal Supply and Demand Brief issued by the Food and Agriculture Organization of the United Nations (FAO). World trade in cereals is predicted to decline by 1.9 per cent in 2022/2023 (July/June) from the year-earlier period to 469.6 million tonnes. 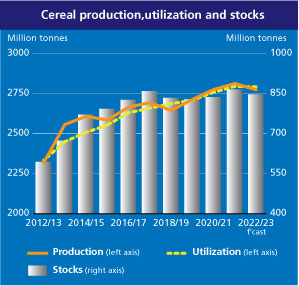 According to the FAO’s new updated cereal production forecast for 2022, with a significantly lower outlook, the bulk of the downward revision concerns coarse grains.

The maize yields in the European Union are expected to drop 16 per cent below their five-year average level due to the exceptionally hot and dry weather conditions. By contrast, FAO raised its forecast for world wheat production from its last report in July to 777 million tonnes, a negligible drop from 2021, on the back of expected record harvests in the Russian Federation and conducive weather conditions in North America. Global rice production is expected to drop by 2.1 per cent from its all-time high reached in 2021, due primarily to uneven rainfall distribution in India and Bangladesh.

World cereal utilization for 2022/2023 is now pegged at 2 792 million tonnes, while global cereal stocks at the close of the 2023 seasons are expected to contract by 2.1 per cent to 845 million tonnes. As a result, the world cereal stocks-to-use ratio is expected to fall slightly from 30.9 per cent in 2021/22 to 29.5 per cent, a level FAO notes is still relatively high from a historical perspective.

Meanwhile, the barometer for world food commodity prices declined for the fifth consecutive month in August 2022, as quotations for most benchmark items dropped, according to a new report released today by the FAO.

The closely watched FAO Food Price Index averaged 138.0 points in August, down 1.9 per cent from July although remaining 7.9 per cent above its value a year before. The Index tracks monthly changes in the international prices of a basket of commonly traded food commodities. 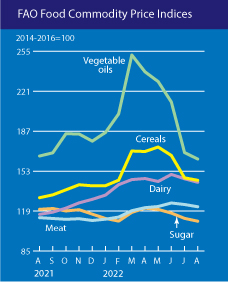 The FAO Cereal Price Index decreased by 1.4 per cent from the previous month, a drop driven by a 5.1 per cent decline in international wheat prices that reflected improved production prospects in North America and the Russian Federation as well as the resumption of exports from the Black Sea ports in Ukraine. Rice prices on average held steady during the month, while quotations for coarse grains increased marginally, by 0.2 per cent, as firmer world maize prices due to hot, dry growing conditions in the European Union and the United States of America were offset by lower barley and sorghum prices.

The FAO Vegetable Oil Price Index decreased by 3.3 per cent from July, reaching a level slightly below that of August 2021. World soy oil prices rose moderately due to concerns over the impact of unfavourable weather conditions on production in the United States of America, but the gain was more than offset by lower quotations for palm, sunflower and rapeseed oils, reflecting increased availabilities of palm oil from Indonesia, due to lower export taxes, and a gradual resumption of sunflower oil shipments from Ukraine’s ports.

The FAO Dairy Price Index decreased by 2.0 per cent in August, while remaining 23.5 per cent above its August 2021 value. World cheese prices increased for the tenth consecutive month, while those of milk eased amid expectations of increased supplies from New Zealand, even as production tracks lower in Western Europe and the United States of America.

The FAO Meat Price Index declined by 1.5 per cent from July, but it remained 8.2 per cent higher than its value a year ago. International quotations for poultry meat fell in August amid elevated global export availabilities, while world bovine meat prices declined on weak domestic demand in some leading exporting countries. Pig meat quotations rose.

The FAO Sugar Price Index decreased by 2.1 per cent to its lowest level since July 2021, triggered mainly by high export caps in India and lower ethanol prices in Brazil.