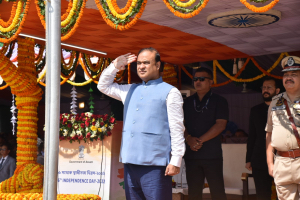 Guwahati: All north-eastern States celebrated the 76th Independence Day with fanfare, defying the diktat from separatist armed militants. Though imposed a total shutdown on 15th August in five NE States, the separatist militant outfits however did not mention the Har Ghar Tiranga campaign starting from August 13, 2022, as a part of Azadi Ka Amrit Mahotsav commemorating India’s 75 years of independence.

A number of outlawed separatist militant outfits including the United Liberation Front of Assam (Independent) and the Yung Aug-led faction of the Nationalist Socialist Council of Nagalim (Khaplang) called for a general strike in Assam, Nagaland, Manipur, Tripura and Meghalaya from the midnight of 14th August till 6 pm next day. Terming the I-Day celebration as fake, the separatist militant groups asked the people to boycott any kind of celebration on the 15th of August.

Terming the Northeast as the western part of the Southeast Asian region, the insurgents claimed that even after 75 years of independence, the indigenous people here are suffering from financial debts and hundreds of other problems. Hence, it remains ‘unfair, historically irrelevant, and worthless’ for a state, which is unable to stand by the suffering people in such a time of declining living standards to celebrate the I-Day, added their media statement.

However, chief ministers of the alienated region took the lead in hoisting the Tri-colour in respective State capital cities where they paid homage to all martyrs and freedom fighters who sacrificed everything in the struggle against the imperialist British forces to make India a sovereign nation. Addressing the people on the sacred occasion, they also highlighted the welfare schemes and future plans. Meanwhile, the north-eastern citizens joined in displaying the national flags in their residences for three full days.

Assam chief minister Himanta Biswa Sarma, while hoisting the national flag in Guwahati, firmly said that sovereignty is non-negotiable. Mentioning the boycott call by the separatists, he asserted that Assam is an integral and inalienable part of India and the exuberant celebrations and display of love for the Tri-colour by the public should be a lesson for those who dream of an independent Assam. Sarma urged the separatist groups to join in the peace talks for the sake of development in the region.

He also announced that the State government has decided to withdraw one lakh fresh and pending cases, precisely related to objectionable social media posts, to lessen the burden on the judiciary. He mentioned that Assam has no less than 400,000 pending cases and it has finally slowed down the speedy dispensation of justice. Now following the withdrawal of a large number of cases, the judiciary can give special focus on so many serious crimes. Sarma also highlighted many welfare schemes like Mission Basundhara, Mission Bhumiputra, Mission Sadbhavana, Orunudoi, etc.

Arunachal Pradesh CM Pema Khandu, while hoisting the national flag in Itanagar, mentioned that this year the frontier State has reached the golden jubilee year (marking fifty years of its naming) and it provides every Arunachali with an opportunity to celebrate and plan for the future ahead. Khandu claimed that Arunachal is an ideal example of wholesome development and the government has been following the vision of Sabka Saath, Sabka Vikas, Sabka Vishwas and Sabka Prayas.

Mizoram chief minister Zoramthanga hoisted the Tri-colour in Aizawl and highlighted the government’s actions against illicit activities (including drug trafficking) while maintaining the law & order situation across the State. He mentioned that a new cyber forensic laboratory was recently inaugurated in the capital city. Zoramthanga also spoke about the initiatives for village-based eco-tourism, agriculture development and health insurance coverages. He assured that the Aizawl civil hospital will be upgraded with funding from the DoNER ministry.

Meghalaya CM Conrad Sangma, while hoisting the Tri-colour in Shillong, proposed to transform the State into a vibrant, globally recognized region by 2032. Insisting on youth employment, Sangma stated that entrepreneurship is the route through which the youth can become job creators (not job seekers).

Sikkim chief minister Prem Singh Tamang, while attending the I-Day function in Gangtok, announced a series of women’s welfare schemes and also launched the mobile village clinics with an aim to deliver healthcare services to the residents in remote areas.

Nagaland chief minister Neiphiu Rio, while hoisting the Tri-colour in Kohima, remembered the freedom fighters with gratitude who gave their all, many even laying down their lives, to get freedom for India.

Tripura CM Manik Saha hoisted the national flag in Agartala and urged everyone to take a pledge to bring glory to India.

Manipur CM N Biren Singh hoisted the national flag in Imphal and revealed many actions against drug smuggling, poppy plantations and other crimes. He insisted on connectivity, infrastructure development and women’s welfare initiatives.

A splendid Tri-colour boat rally on the mighty Brahmaputra river was organised by the Dhubri district administration in western Assam on the eve of I-Day, where 75 machine boats, designed with the three colours of national flags and balloons were put on the march from Kachari Ghat to Chalakura Char (river island). Dhubri district magistrate Anbamuthan MP took the initiative in collaboration with the Border Security Force and State police to spread awareness among the people living in the Char areas over the I-Day celebrations.

In Guwahati, CM Sarma flagged off a cycle rally from the city to Sivasagar, which was organised for generating awareness on environmental conservation. He commented that in view of the dwindling forest cover, global warming has become a major concern. He called upon everyone to plant saplings and take care of their survival. Sarma also participated in a Prabhat Pheri (a traditional morning march starting from Kamrup Academy School), where school and college students joined in it to mark the beginning of the nationwide Tri-colour festival.