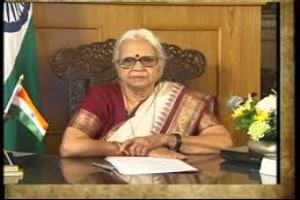 New Delhi: Eminent Hindi writer and first woman governor of Goa, Mridula Sinha, passed away here today. She had suffered stroke on Diwali night and was hospitalised ever since.

Born in Muzaffarpur in Bihar on November 27,  1942, she died just ten day short of what would have been her 78th birthday.

Married to Ram Kripal Sinha, who at that time was a college lecturer based in Muzaffarpur  and later became a cabinet minister in Bihar, she herself became active in politics first with the Jan Sangh and then with the Bharatiya Janata Party. She rose to become a member of the national executive of the BJP. She had also served as President of the BJP Mahila Morcha (women’s wing) before she got appointed as Goa’s governor on August 25, 2014, she was appointed as the Governor of Goa.

She was also a contributor to globalbihari.com.

Her novel Jyon Mehendi Ko Rang was adapted into a T.V Serial and her short Story  “Dattak Pita” and biography on Vijayaraje Scindia Rajpath se lok path par were made into feature films as Dattak and Ek thi Rani Aisi Bhi respectively.

Sinha was conferred an honorary doctorate by the Babasaheb Bhimrao Ambedkar Bihar University in Muzaffarpur. She was also the recipient of Acharya Tulsi Kartritva Puraskar in 2017 by Akhil Bhartiya Terapanth Mahila Mandal.

Till her very last she was a permanent fixtures in webinars on various social issues.

Prime Minister Narendra Modi expressed deep grief over the demise of Sinha. In a tweet, the Prime Minister said, ” Smt. Mridula Sinha Ji will be remembered for her efforts towards public service. She was also a proficient writer, making extensive contributions to the world of literature as well as culture. Anguished by her demise. Condolences to her family and admirers. Om Shanti.”