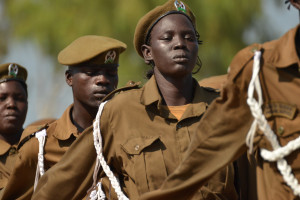 Khartoum/New York/Newark/Beijing/Geneva: In a coup d’état today, Sudan’s military dissolved civilian rule, arrested political leaders including Prime Minister Abdalla Hamdok, and declared a state of emergency in the country. Protesters have reportedly taken to the streets of the capital, Khartoum, and there are reports of gunfire.

It may be mentioned that after long-time ruler Omar al-Bashir was overthrown by the military following months of popular protest in April 2019, a transitional government comprising both military and civilian leadership was due to lead to full democratic elections in 2023.

Agencies report gunfire on protesters who have reportedly taken to the streets of the capital.

In Newark, White House Principal Deputy Press Secretary Karine Jean-Pierre told reporters that the United States was deeply alarmed at reports of the military takeover at the transitional government. “We reject the actions by the military and call for the immediate release of the Prime Minister and others who have been placed under house arrest,” she said, and stated that the actions today were in stark opposition to the will of the Sudanese people and their aspirations for peace, liberty, and justice. “The United States continue to strongly support the Sudanese people’s demand for a democratic transition in Sudan and will continue to elevate — evaluate — pardon me — how best to help the Sudanese people achieve this goal,” she stated.

In Geneva, UN High Commissioner for Human Rights Michelle Bachelet condemned today’s military coup in Sudan and the declaration of a nationwide state of emergency, the suspension of key articles of the Constitutional Document and the governing bodies.

“These actions threaten the Juba Peace Agreement and jeopardize the important progress made towards democracy and respect for human rights,” she said. She asked the military authorities to abide by the constitutional order and applicable international law, withdraw from the streets, and resolve any differences they have with the civilian component of the Transitional Council through dialogue and negotiation.

“I utterly deplore the reported arrest of the Prime Minister, several Ministers, leaders of the Forces of the Freedom and Change and other civil society representatives, and call for their immediate release,” she said and pointed out that blanket internet shutdowns contravene international law. “Internet and mobile services must be restored, as they are essential for people to seek and receive information, particularly in these unsettling circumstances. We remind military and security forces to refrain from unnecessary and disproportionate use of force, to respect people’s freedom of expression, as well as the right of peaceful assembly,” she said.

It would be disastrous if Sudan goes backwards after finally bringing an end to decades of repressive dictatorship. The country needs to move forward to consolidate democracy, a wish expressed countless times by the Sudanese people, including loudly and clearly on the streets last week and today.

In Beijing, Chinese Foreign Ministry Spokesperson Wang Wenbin stated, “China is following the latest developments in Sudan, and calls on relevant parties in Sudan to resolve differences through dialogue and maintain national peace and stability.” He said at present, the Chinese embassy was operating normally. “China will closely follow the developments and take necessary measures to ensure the safety and security of Chinese institutions and people in Sudan,” he added.