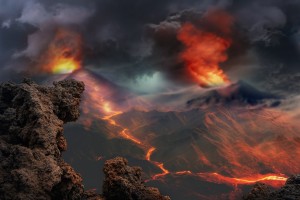 Pune: Large volcanic eruptions can help to forecast the monsoon over India – the seasonal rainfall that is key for the country’s agriculture and thus for feeding one billion people. As erratic as they are, volcanic eruptions improve the predictability, an Indian-German research team finds.

What seems to be a paradox is in fact due to a stronger coupling between the monsoon over large parts of South and South-East Asia and the El Niño phenomenon after an eruption. (El Niño is a climate cycle in the Pacific Ocean linked to a periodic warming in sea surface temperatures across the central and east-central Equatorial Pacific).

Combining data from meteorological observations, climate records, computer model simulations, and paleoclimate archives such as tree-rings, corals, cave deposits and ice-cores from past millennia of Earth history, the researchers found that a synchronization of the monsoon with the strongest mode of natural climate variability, the El Niño, makes it easier to anticipate the strength of seasonal rainfall in the Indian subcontinent.

“The tiny particles and gases that a large volcano blasts into the air enter into the stratosphere and remain there for a few years. While the volcanic matter in the stratosphere to some extent blocks sunshine from reaching the Earth’s surface, the reduced solar forcing increases the probability of an El Niño event in the next year,” says R. Krishnan from the Indian Institute of Tropical Meteorology in Pune. “This is because less sunshine means less warmth and hence a change of temperature differences between the Northern and Southern hemisphere, which in turn affects the atmospheric large-scale circulation and precipitation dynamics. Advanced data analysis now reveals that large volcanic eruptions are more likely to promote the coincidence of warm El Niño events over the Pacific and Indian monsoon droughts – or, in contrast, cool La Niña events over the Pacific and Indian monsoon excess.”

The year-to-year variability of the Indian monsoon rainfall strongly depends on the El Niño / Southern Oscillation – a climatic phenomenon in the tropical Pacific Ocean whose Spanish name means ‘the boy’, referring to the child Christ because the water near South America is often at its warmest near Christmas.

“The synchronization between tropical Pacific Ocean and Indian monsoon is changing over time, with human-made global warming being one of the factors, worsening the accurate prediction of the monsoon,” says Norbert Marwan from the Potsdam Institute for Climate Impact Research (PIK). “This in fact confirms a hypothesis that our colleagues Maraun and Kurths advanced 15 years ago. The new findings now suggest a novel, additional path for monsoon predictions that is crucial for agricultural planning in India.” Previous research from PIK already substantially improved Monsoon prediction for years without volcanic eruptions.

The findings can also help further developing climate models and could in fact also help assessing the regional implications of geo-engineering experiments. To reduce global warming from human-made greenhouse gases, some scientists envision solar radiation management – basically to block a portion of sun rays from warming Earth’s surface by putting dust in the high atmosphere, similar to what the natural phenomenon of a volcanic eruption does. Artificially blocking sunshine, however, might dangerously interfere with a number of processes in the atmosphere. Understanding the mechanisms at play is thus important.