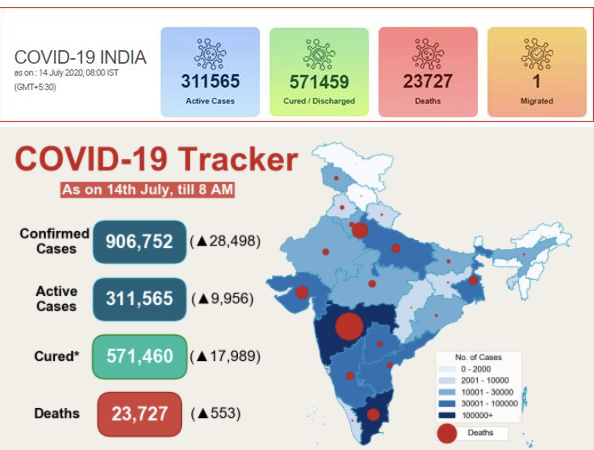 New Delhi: As the total Corona cases rose to 90,7652 with 28498 cases registered in the last 24 hours, and the total Corona related death toll at 23,727 with  553 deaths reported in the last 24 hours in the country, the government on Tuesday claimed the country’s fatality rate had dropped to 2.62 per cent. It stated  on Tuesday that there were  3,11,565 active cases and they are all under medical supervision, either in home isolation or in hospital care.

In the last 24 hours Kerala with 713 new cases, Madhya Pradesh with 575  and Chhattisgarh with 184 new positive cases witnessed the highest single day spike of Corona cases in the respective states. In Madhya Pradesh,  Gwalior became the new hotspot where 110 new cases were reported on Monday. It was followed by  92 cases from Indore and 88 from Bhopal.

The state tally of COVID-19 patients in Maharashtra currently stood at 2,60,924.  Also, 193 more patients succumbed to the infection  in the last 24 hours and with this, the death toll rose to 10,482 in the state. The present count of active patients in Maharashtra state was 1,05,637. In the wake of surge in Covid-19 cases lockdown had been re-imposed in Pune and Pimpri- Chinchwad region since midnight last.

In  Gujarat,  902 new COVID cases were recorded during the last 24 hours. Total number of cases detected so far in the state thus went up to  42,808. Out of total 10,945 active cases in the state, the conditions of 74 patients were serious and they were on ventilator, the government stated.

In the meantime, in Hyderabad, the Telangana High Court tore into the state government for not doing mass testing for Covid-19 and summoned Public Health Director Dr G Srinivasa Rao to appear before it to explain. While Telangana, after much delay, has started rapid antigen testing, it is not following the ICMR protocol strictly. Though the ICMR suggested that those who test negative in an antigen test, need to undergo a RT-PCR test, the government decided to ask symptomatic people to go into isolation, instead of testing them again. The state had 36,221 total cases reported till Monday of which active cases were 12, 178 and 365 deaths were reported so far in the state due to COVID-19. In all 23,679 patients were discharged from the hospitals thus far.

In Karnataka, lockdown came into effect from 8pm on Tuesday in Bengaluru urban and Bengaluru rural districts. In Dakshin Kannada, Dharwad and Kalburgi districts lockdown will come into force from tomorrow. The state government meanwhile, warned private hospitals and medical colleges that criminal case will be filed for refusal of treatment to covid patients. In all  2738 new cases and 73 deaths reported on Monday with 1315 cases from Bangalore city. Karnataka had thus far reported 757 deaths while total positive cases stood at  41,518 and active cases at 24,572.

The neighbouring Andhra Pradesh, which saw 1916 new cases, 952 discharges and 43 deaths during last 24 hours, issued fresh guidelines for quarantine of people coming into the state from various parts of the country and abroad, advising strict home quarantine for 14 days.  Referring to Karnataka and Telangana states categorised as high-risk, the  State has not opened inter-state borders yet for movement of persons. Obtaining e-pass for entry into the state is still mandatory in the state. The Andhra Pradesh DGP launched ‘Operation Muskan COVID-19’, which aims to eradicate child labour, paying special attention to control covid and save street children from virus infection. The state has total cases: 33,019, active cases: 15,144;  and Deaths: 408. In all 17,467 patients were discharged thus far.

Meanwhile in Sikkim, Chief Minister, Shri Prem Singh Tamang convened an emergency meeting of the State Task Force on Tuesday to discuss the latest spike in the number of Covid-19 cases in Rongli Subdivision and the immediate measures to be taken. Following the meeting, the Sikkim government announced new measures to contain COVID-19. While Gyms and bars were ordered to be shut, all inter and intra district movement were “stopped forthwith”. Movement of all private vehicles including two-wheelers has also been banned. Taxis however will continue to ply following odd-even stipulation but only for local movement.The rules come into force with immediate effect and will continue till 31 July.

In Kerala, which reported one more death due to Covid-19  at Alappuzha Medical college, taking the total death toll to 34 in the state, Alappuzha, Thrissur, Palakkad and Kannur districts have been asked to stay alert as local transmission cases were on the rise in these districts. Morevoer,  Rapid Response Team was deployed in Chellanam Panchayat in Ernakulam where 35 more positive cases were reported. Two doctors each in Kochi and Trivandrum had been tested positive. Meanwhile, a petition was also filed in the Kerala High Court, seeking to ban protests during the Covid-19 pandemic. In all 449 new cases reported in the state on Monday of which 144 were contact cases and 18 were of unknown source. Active cases in the State stood at  4,028.

In the meantime the Union Ministry of Health and Family Welfare state on Tuesday that during the last 24 hours 2,86,247 samples have been tested and the testing per million for India was consistently rising. The cumulative number of samples tested, as of now stood at 1,20,92,503, it stated.