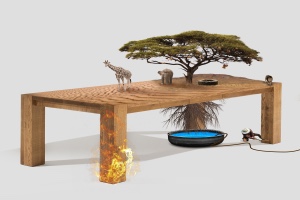 More than 200 million Indians suffer chronic diseases, including cancer of the kidneys and skin, because of drinking groundwater contaminated by lethal heavy metals like arsenic, a water expert told a forum Tuesday.

Water experts, government officials and civil society representatives spoke at the event titled ‘Groundwater: Making the Invisible Visible’ hosted by Global Bihari to mark World Water Day [WWD], observed on March 22 every year. They adopted a resolution that there was a need to make it mandatory for the owner of every borewell to create and maintain a pit with a filter near the borewell to recharge groundwater with rainwater. The resolution was moved by one of the participants, Dr Ravindra Vora.

In his presentation at the forum, the Varanasi based chief functionary of Innervoice Foundation, which functions as CAMRO-Community Arsenic Mitigation and Research Organization, Dr Saurabh Singh, shared his work in eastern Uttar Pradesh and Bihar. He said, “Arsenic levels in groundwater are alarming. Arsenic consumed through water is slow poisoning. It causes cancer of the kidneys, skin, and other cardiovascular diseases. Arsenic content in potable water is a violation of human rights. Activists need to spread awareness of this grave health issue. Relevant state and federal authorities should and immediately intervene.”

Keynote speaker and recipient of Magsaysay Award 2001 and Stockholm Water Prize 2015, Dr Rajendra Singh, speaking from Dubai, congratulated and praised the water conservation work of civil societies and state governments on WWD. He lauded these groups for working according to their calling and expertise in their respective fields of water conservation. Encouraging participants of the Global Bihari forum, he said, “Water Day should not be observed one day in a year, but every moment. He praised the United Nations’ theme for this WWD. “Water conservation workers would be successful if we fill Earth’s belly with water. If Earth’s belly is empty then our stomachs too will not get water.”

Dr Singh urged all to unite, spread awareness on preserving the world’s flora and fauna, and work to strengthen the sustainable development of water resources. “To achieve this noble goal as well as preventing pollution we must be ready even to go on satyagraha,” he said and added the government’s education ministry should consider adding lessons on water conservation in the school syllabus.

Telangana Water Resources Development Corporation Chair Veeramalla Prakash Rao spoke on the topic ‘Ways to replenish groundwater. “India has 16 per cent of the world’s population, but only four per cent have access to potable water.” He shared Telangana’s success story of replenishing groundwater in 42 water bodies.

“Through modern technology such as deep penetrating borewells, man is extracting more water than he is recharging it. From a comfortable position, over-extraction has brought us to this state. For example, in Karnataka, overexploitation of water prevails in 52 taluks according to our latest GW data 2020. We need a strategy to manage our water problem. Rather than conflict, the decision-makers need to co-operate. We need to prioritise needs whether potable water or for other domestic use. Based on the need, we can control the supply so each sector receives water. If all people join hands and co-operate, we will be able to reach our goal of sustainable development of water resources.”

On the challenges, Anitha said, “we should have sufficient source water, space, and quantity of rainwater harvesting. We should be able to recharge our aquifers efficiently”.

Paediatric surgeon and water diseases expert Dr Ravindra Vora spoke on ‘The impact of contaminated water on health’. He listed the threats and remedies in his PowerPoint presentation. “Conservation of water and sustainable use is the way forward,” he said. “Drinking water is limited. Just three per cent of water available on our planet is potable, 97 per cent is salty seawater. Out of the three per cent, two per cent of glaciers in the Arctic and Antarctica poles hold two per cent. So only one per cent of potable water is available to humans.”

Environmentalist and Indian Himalayan River Basin Council Chair Dr Indira Khurana spoke on the topic ‘The link between groundwater and a river’ from Agartala, Tripura where she launched an event on WWD. she said, “We went to the source of the 51-km long Howrah River. It flows through Agartala town and then it goes on to Bangladesh. We are studying the challenges this river faces.”

Dr Indira gave an outline of her group’s work of recharging groundwater in the Indian Himalayan river basin. “Our main work here is to link the hearts, minds actions of people living around rivers and to the rejuvenation of people and society. Here, it is important to realise the dynamic and symbiotic relationship between groundwater and surface water and rivers. For example, the work done by Tarun Bharat Sangh of reviving rivers. They did it by first recharging the groundwater by building structures that allowed the recharging of groundwater. So, this dynamic relationship between the groundwater and surface water that had snapped came alive through the efforts of water conservation.”

*Sudeep Sonawane is a Consulting Editor of Global Bihari. He has lived in five countries in the Middle East and Asia and worked for newspapers published there.