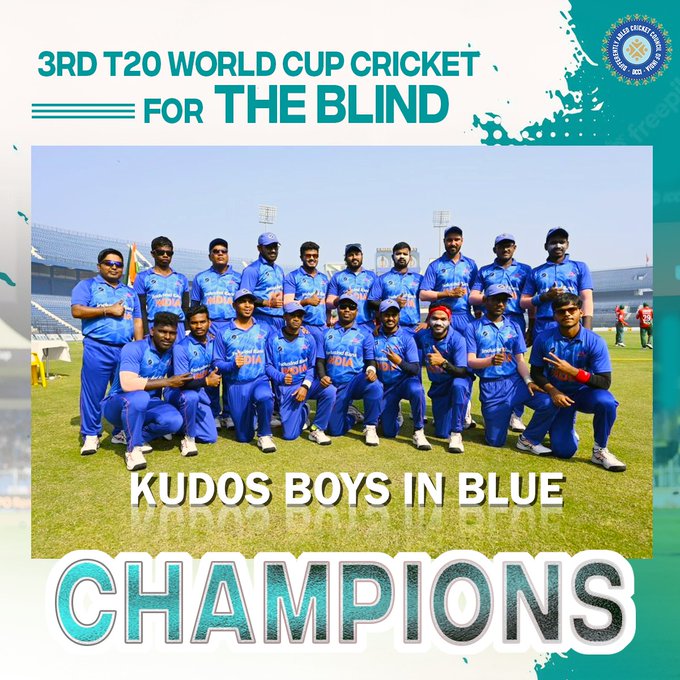 Bengaluru: Boys in Blue won the third consecutive T20 cricket world cup for the blind by defeating Bangladesh by 120 runs in the finals at the M Chinnaswamy Stadium here today. Skipper Ajay Kumar Reddy and Sunil Ramesh scored brilliant centuries. While Sunil hit an unbeaten 136 off 63 balls with the help of 24 boundaries and one six, skipper Ajay remained unbeaten at 100 off 50 balls and with 18 boundaries.

Opting to bat, India had a disastrous start as it quickly lost two wickets and was reduced to 29/2. However, Ajay and Sunil ensured that India scored  277/2 in 20 overs. In reply, Bangladesh scored 157/3 in 20 overs. The in-form Bangla opener Salman top-scored for his team with an unbeaten 77.

India remained unbeaten throughout the tournament. The win comes on the back of the win of the DICC T20 Champions Trophy for the Deaf in the United Arab Emirates by the Indian Deaf Cricket team. “We are at the forefront of Divyang cricket in India,” Indian Deaf Cricket Association (IDCA) stated in its congratulatory message.

In his message, Prime Minister Narendra Modi stated: “India is proud of our athletes. Delighted that we have won the T-20 World Cup for the Blind. Congratulations to our team and best wishes to them for their future endeavours.”