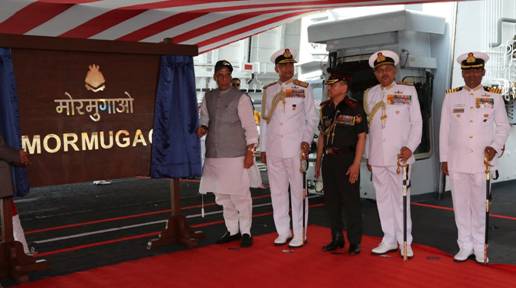 Singh described INS Mormugao as one of the most powerful indigenously-built warships which will significantly enhance the country’s maritime capabilities and secure national interests. “INS Mormugao is one of the world’s most technologically-advanced missile carriers. With over 75% indigenous content, it is a testimony to India’s excellence in the design and development of warships and a shining example of our growing indigenous defence production capabilities. The warship will meet the present and future needs of our country as well as of our friendly countries across the globe,” he said.

The Defence Minister also praised MDL for growing in stature by continuously building new ships with state-of-the-art technologies. He urged them and other shipbuilding companies to enhance their capabilities by taking advantage of the Government’s initiatives and move forward towards making India an indigenous shipbuilding hub.

“Countries around the world are today moving towards modernising and strengthening their military power due to the global security scenario. The demand for military equipment is continuously increasing. We have introduced a number of policies which will help our public or private sector companies to become world-class players. You all must take advantage of these policies and strive to cater to the needs of our Navy & Coast Guard while meeting international requirements,” he said.

Singh lauded the Armed Forces for protecting the borders and coasts with unmatched courage and dedication, terming them as the backbone of India’s “unprecedented” growth.