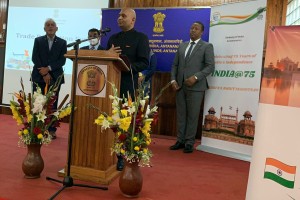 Antananarivo: An India-Madagascar Chamber of Commerce was launched at a trade promotion event organised by the Embassy of India here today.

Ambassador of India to Madagascar Abhay Kumar gave his opening remarks in the event informed that the bilateral trade in 2021-22 between India and Madagascar stood at US$ 363.99 million. India was the second-largest origin of imports for Madagascar in 2020 (EIU-2022) constituting 9.4% of total imports by Madagascar. “There is huge potential in trade sector that the two nations can explore ranging from agricultural commodities to pharmaceuticals, from machinery to textiles,” he said.

Madagascar is a beneficiary of India’s Duty-Free Preferential Tariff Scheme that provides tariff preferences by India on products originating in Madagascar. The Ambassador suggested considering setting a goal of achieving a $1 billion trade figures target between India and Madagascar in the next five years.

“India-Madagascar Chamber of Commerce will go a long way in strengthening the bilateral trade relationship between our two countries. It will serve as a focal point for numerous Indian and Malagasy traders who would like to business with our two countries and also those who wish to extend their markets to India or Madagascar,” he said.

The Event also witnessed remarks made by Secretary-General of Presidency of Madagascar Valery Fitzgerald Ramonjavelo recalling the strong relationship between India and Madagascar while welcoming the announcement of the India-Madagascar Chamber of Commerce. “Madagascar is six hours away from the huge market of 1.4 billion people of India and we must work towards maximum utilization of this opportunity”, he said.

Special videos on Ayurveda and trade opportunities between India and Madagascar were showcased during the event. The event saw cultural performance by ITEC and ICCR alumni in Madagascar to mark the Azadi Ka Amrit Mahotsav.