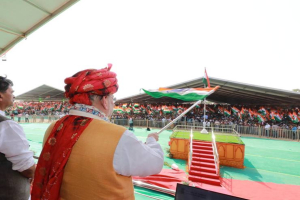 The attempt was witnessed by representatives of the Guinness Book of World Records and attendees were asked to wear bands for the physical identification in the presence of Union Home Minister Amit Shah and Union Ministers RK Singh. Ashwini Choubey and Nityanand Rai. Bihar’s Deputy Chief Ministers Tarkishore Prasad and Renu Devi were also present during the occasion. Together with thousands of people gathered, they raised the tricolour for five minutes and sang the national song ‘Vande Mataram’.The complete event is documented in video form.

The event was organized by the Ministry of Home Affairs and Ministry of Culture under the ‘Azadi Ka Amrit Mahotsav‘, the 75th anniversary of India’s Independence, to pay tribute to the glorious victory of the then King of Jagdishpur, Veer Kunwar Singh, who is considered one of the ‘heroes’ of the freedom struggle of 1857.

Veer Kunwar Singh had emerged as a prominent leader of the Indian freedom struggle of 1857, who fought bravely against the British colonial rule.

The great martyr belonged to the Ujjayini dynasty of the Parmar Rajputs of Jagdishpur, a part of the present-day Bhojpur district, Bihar, India. At the age of 80, he led a selected band of armed soldiers against troops under the command of the British East India Company.. He was a significant hero of the freedom struggle in Bihar against British colonial rule.