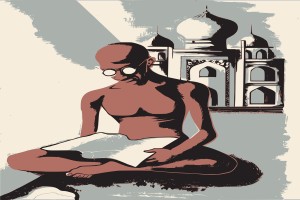 (This article was published on July 26, 1921 in Bombay Chronicle)

An instance of pure Swadeshi of the type that is today proposed by Mr. Gandhi that is of a boycott of all foreign cloth is afforded by the history of England in the eighteenth century before she had begun to enjoy any political sway in India. The British manufacturer was seriously alarmed by the “passion for coloured Indian Calicoes” which Queen Mary had helped to spread through all classes, and a boycott of foreign goods was immediately thought of. Says Mr. Lecky, the historian of the period: –

“At the end of the seventeenth century great quantities of cheap and graceful Indian Calicoes, muslins and chintzes were imported into England, and they found such favour that the woollen and silk manufacturers were seriously alarmed. Acts of Parliament were accordingly passed in 1700 and 1761 absolutely prohibiting, with a few specified exceptions, the employment of printed or dyed calicoes in England, either in dress or in future, and the make of any printed or dyed goods of which cotton formed any part.” It became “penal for any woman to wear a dress made of Indian calico. 1706 a lady was fined 900 pounds at the Guild Hall because it was proved that her handkerchief was of French Cambric.”

As I have said it was quite legitimate for her to prohibit by legislation the import of foreign cloth. But as soon as she began to possess political power she exceeded the bounds of legitimacy and for a period of 70 to 80 years carried on a systematic campaign not of punishment, but of rapacity and succeeded in destroying the Indian industries as Mr. Brocklehurst in the quotation at the top confessed without a shadow of compunction.

I turn now to a brief narration of that painful episode. Nowhere has it been better told than in the pages of that great and faithful servant of India, the late Mr. R.C. Dutt. He has let the story to be told by Government records and British travellers and British historians.

The selfish commercial policy was begun as soon as the company began to exercise any political power, and it was pursued with systematic thoroughness and fateful success in various sorts of ways; e.g., compelling Indian artisans to work in the company’s factories compelling them to surrender their trade secrets, by investing the company’s agents with powers over villages and communities of weavers protective and prohibitive tariffs.

Mr. Dutt quotes the following detailed account of the doings of the company’s gomashtas from a letter of Sergeant Brego, dated 26th May, 1762: –

“A gentleman’s sends a Gomashta here to buy or sell; he immediately looks upon himself as sufficient to force every inhabitant either to buy his goods or sell him theirs; and on refusal (in case of non-capacity) a flogging or confinement immediately ensues.This is not sufficient even when willing, but a second force is made use of, which is to engross the different branches of trade to themselves and not to suffer any person to buy or sell the articles they trade in; and if the country people do it, then a repetition of their authority is put in practice; and again what things they purchase, they think the least they can do is to take them for a considerable deal less than another merchant, and often times refuse paying that; and my interfering occasions and immediate complaint. These and many other oppressions more than can be related, which are daily used by the Bengal Gomashtas in the reason that this place (Backergunj, a prosperous Bengal District) is growing destitute of inhabitants; every day numbers leave the town to seek a residence more safe, and the very markets, which before afforded plenty, do hardly now produce anything of use, their peons being allowed to force poor people and if the Zemindar offers to prevent it, he is threatened to be used in the same manner.Before justice was given in the public catcheree, but now every Gomashta is become a judge and everyone’s house a cutcheree; they even pass sentences on the Zemindars themselves and draw money from them by pretended injuries such as a quarrel with some of the peons as their having, as they assert, stole something which is more likely to have been taken by their own people.”

That is how the inland trade was disorganized.  Mr. Dutt quoting from a letter of the same period by William Bolts, shows how manufacturers were oppressively secured:

“It may with truth be now said that the whole inland trade of the country, as at present conducted, and that of the company’s investment for Europe in a more peculiar degree has been one continued scene of oppression; the baneful effects of which are severely felt by every weaver and manufacturer in the country, every article produced being made a monopoly; in which the English with their Bunyans and black Gomashtas arbitrarily decide what quantities of goods each manufacturer shall deliver and the prices he shall receive from them.

Upon the Gomashta’s arrival at the Aurung, or manufacturing town, he fixes upon a habitation which he calls his Cutcherry; to which by his peons and piracarahas, he summons the brokers, called dalals and pykars, together with the weavers, whom after receipt of the money despatched by his masters, he makes to sign a bond for the delivery of a certain time and price and pays them a certain part of the money in advance. The assent of the poor weaver s in general not deemed necessary; for the Gomashtas, when employed on the company’s investment, frequently makes them sign what they please and upon the weavers refusing to take the money offered – it has been known they have had it tied in their girdles, and they have been sent away with a flogging. A number of these weavers are generally also registered in the books of the company’s Gomashtas, and not permitted to work for any others, being transferred from one to another as so many slaves, subject to the tyranny and roguery of each succeeding Gomashtah… The roguery practised in this department is beyond imagination but all terminates in the defrauding of the poor weaver for the prices which the company’s Gomashtas and in confederacy with them the Jachendars (examiners of fabrics) fix upon the goods, and in all places at least 15 per cent and some even 40 per cent less than the goods so manufactured would sell in the public bazaar or market upon free sale… Weavers, also upon their inability to perform such agreements as have been forced upon them by the company’s agents universally known in Bengal by the name of Mutchulkars, have had their goods seized and sold on the spot to make good the deficiency; and the winders of raw silk called Nagoads, have been treated also with such injustice that instances have been known of their cutting off their thumb to prevent their being forced to wind silk.”

This oppression was combined with an insistence on the part of the company servants to carry on all internal trade free of all duties which the Indians were bound to pay. As against this Mir Kassam, the then Nawab protested indignantly and abolished all inland duties. Far from appreciating the noble benevolence of this act the Calcutta Council vehemently protested against it as ‘a breach of faith towards the nation!’ “The conduct of the company’s servants upon this occasion”, quotes Dutt from James Mill, “furnishes one of the most remarkable instances upon record of the power of interest to extinguish all sense of justice and even of shame.”

The Directors did protest against this system of monopoly and coercion, but they themselves did not hesitate to perpetrate a greater offence as soon as the Dewans of Bengal, Behar and Orissa gave them political power. …….