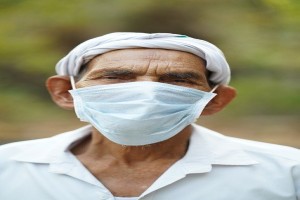 Ahmedabad: The Gujarat High Court has directed the state government to double the penalty to Rs 1,000 for not wearing mask in the public places or in any gatherings while maintaining social distancing.

The High Court in its order on Tuesday also told the state government that in the event of the defaulter caught the second or
subsequent times without the mask, the penalty should be raised to Rs 5,000. The court asked the government to issue necessary notifications increasing the penalty forthwith.

The high court had earlier issued a similar advice to the state government but that was in the recommendation form. Looking at the inertia of the state administration to hike the penalty, apparently because it was unwilling to be viewed as a “harsh government,” the high court was forced to issue it as a directive so that steep penal charges could act as a deterrent for the people deliberately not wearing masks risking their own and the lives of others in the Corona pandemic.

The state government had imposed a penalty of Rs 200 for not wearing masks and spitting in public places in May when the lockdown was on. Last month the penalty was hiked to Rs 500 in Ahmedabad and Surat municipal corporation areas while it remained Rs 200 in the rest of the state. Only from the current month, it was uniformly raised to Rs 500 all over the state, ignoring the High Court’s pending recommendations to hike it to Rs 1,000.

Even when the penalty was only Rs 200, the police had raised over Rs. eight crores from the defaulters which give an idea of the number of people ignoring the government guidelines to compulsorily wear masks in public places. That was when hundreds of others escaped unnoticed because the police could not keep watch on every citizen. Among the caught without masks were mostly those driving or pillion-riding two wheelers and had to stop at traffic junctions. Those on foot without masks were rarely caught while the four-wheeler drivers were exempted from wearing the masks inside the cars if they were the sole occupant.

Particularly for the political leaders, not wearing masks in public have almost become a fashion, probably to show to the general masses that they wield power. There had been umpteen cases of the videos going viral on the social media showing senior political leaders including the members of the state Assembly, municipal corporations and other elected bodies attending public functions without wearing masks and even violating social distancing. Last week, videos were doing rounds in the social media showing two ministers, including the minister of state for health Kumar Kanani, attending public functions and posing for photographs with none in picture seen with masks. A BJP member of the state Assembly was seen performing some religious rituals near a dam in Kutch with none of them, including the MLA, wearing mask.

Even the Congress members are not far behind. A video showed a Congress MLA celebrating his birthday with none wearing mask. The MLA, however, later claimed that the video was false, it was filmed during his birthday celebrations last year and was not of the current year when wearing masks have become a general norm. There were also numerous instances of the Congress leaders organizing protest gatherings on one issue or the other and in almost every time, social distancing norm was given a go-bye even if some of them at least wear masks. But in none of the cases involving the political leaders, either of the BJP or the Congress, there were no information of any penalty levied from the defaulters even when the police were present at the scene of
such rampant violations.

In addition to hiking the penalty for masks, the high court has also directed the state government to explore the possibility of re-imposing ban on people from Ahmedabad and Surat cities visiting any other place in the state in view of the increasing Corona cases in other parts of the state and in the countryside. Gujarat has become almost entirely open under the union home ministry’s guidelines in unlock one and two in the last two months and all restrictions on movements within the state were gradually withdrawn after which Corona hotspot shifted from Ahmedabad to Surat and was now threatening other major cities like Vadodara, Rajkot, Bhavnagar and Junagadh where the number of daily positive cases were on the rise. In the last one week or so, more positive cases were being reported from smaller district centres compared to the major urban conglomerations causing concern for the authorities.