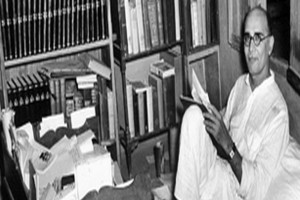 I am realising how difficult it is to learn an entirely new language which is not spoken by people around you. This realisation dawned on me while attending Malayalam language classes. I am wondering how grandfather Mahadevbhai Desai had not only learned but mastered Bengali, Marathi, Sanskrit and English in his early twenties, years before he joined Mahatma Gandhi as his principal secretary. It was his calligraphic handwriting and command of the English language that had impressed barrister M K Gandhi so much that on their first meeting in 1915 he had told Mahadev, “You are meant for me.”

Before he met Mahatma Gandhi for the first time in July, 1915, Mahadevbhai had already established a name for himself as a linguist with command over English, Sanskrit, Gujarati, Marathi and Bengali. He was only 23. He had won the first prize of Rs. 1,000 for translating into Gujarati Lord Morley’s book, On Compromise, in a competition held by the Gujarati Forbes Association in which many senior Gujarati litterateurs had participated as his competitors.

Also read: First Person: Gandhiji used to call her Tofanee and she was Tagore’s favourite

While studying for his law degree, Mahadevbhai had learnt Bengali and translated poet laureate Rabindranath Tagore’s novelette ‘Chitrangada’. He had read all the classic Gujarati books of his time as also a wide range of English literature available in the college library. He was particularly interested in books on history, philosophy, international affairs, arts and literature. He had contributed articles and poems in Gujarati and English to the college magazine, Elphinstonian under the nom de plume ‘Bhola Shambhu’.

Mahadevbhai was born on January 1, 1892 in Saras village of Olpad taluka of Surat district. His father Haribhai Surbhai Desai was a teacher in a one-room school. Mahadevbhai’s grandfather Surbhai was a religious-minded person. The lane of his village Dihen was called ‘Tilwa Falia’ after Surbhai’s habit of wearing a mark on his forehead. In his childhood, Mahadevbhai was exposed to Hindu religious scriptures like the Ramayana and Mahabharata and had learned Sanskrit.

With a monthly salary of Rs. 40, Haribhai could not have afforded higher education for his son much as he would have wanted to. However Mahadevbhai, who stood first in Surat in the matriculation examinations, got a scholarship and enrolled himself in the Elphinstone College, Bombay. Elphinstone College, one of the oldest in Bombay, had produced extraordinarily learned men such as Dadabhai Naoroji, Madhav Govind Ranade and Phirozeshah Mehta. Mahadevbhai frequently contributed articles, mostly poems, to the college journal, Elphinstonian. Mahadevbhai was to become famous later for his translation of Bengali and English poems into Gujarati.

Being a meritorious student and from a poor family background, Mahadevbhai got free boarding in the Gokuldas Tejpal Boarding Hostel. The freeship available from the boarding provided for boarding, lodging, clothes and half the fees of a college in Bombay that had the lowest fee structure. The expenses on transport, books, tea and snacks were covered by the scholarship.

Unlike the rich students of his college who spent lavishly on fashionable clothes, restaurant, entertainment and sports, Mahadevbhai spent time in the reading room of the college library, in debates and discussions with like-minded friends on public affairs, politics, literature and philosophy. His close friends and classmates included Vaikunthbhai Mehta, who had given up his scholarship so that Mahadevbhai could get it, Syed Abdullah Brelvi, who later became the editor of the Bombay Chronicle, and Kanhaiyalal Vakil, the art critic of the same newspaper.

Mahadevbhai passed his B.A. examinations with First Class in 1910. He had Philosophy and Logic as subjects for his B.A. Though he was deeply interested in reading poetry, plays and novels, he had chosen Philosophy as the optional subject in B.A. “Mahadev was religious-minded from the beginning. His life was fully enriched by the opportunity he got, in the course of his college studies, of reading and understanding the systems of philosophy of different countries, and he passed on the benefits of his study to the people,” reminisced his bosom friend Vaikunthbhai Mehta.

After his graduation, Mahadevbhai decided to pursue his studies for a law degree. Since his scholarship ended after graduation, he took up a job with the Oriental Translators’ Office to finance his stay and studies in Bombay and obtain a degree in law. The Oriental Translators’ main function was to translate into English books, pamphlets and all kinds of literature of Indian languages for the British officials to decide if these contained ‘objectionable’ content. Here, Mahadevbhai honed his translation skills to perfection. He would not only finish the task given to him but would also help his colleagues in their work.

In his memoirs, ‘Romance of the Oriental Translators’ Office’, Z.A. Barni, his senior, fondly remembers Mahadevbhai. “He was jolly by nature and met everyone with a smile. He aroused affection by his kind and courteous manners. His mere contact was enough to transform the people who were pessimists into optimists. He had neither insulted nor displeased anyone. About him the definition of gentleman given by Cardinal Newman was appropriate.”

Barni further writes, “I consider it as one of the misfortunes of my life that I did not have a chance to meet him. But I have evinced affection and respect for him from all that I have heard about him from his friends, Brelvi and Vaikunthbhai Mehta and also from Sanjana (Jehangir Edulji Sanjana was Mahadevbhai’s boss). His work in the office was very much above the average. He was hardworking as well as very fond of reading.”

Even while he was pursuing his graduation, Mahadevbhai evinced keen interest in national and international affairs. In his first year of college he had attended the session of Gujarati Sahitya Parishad in Surat and in his last year the All India Congress Session held in Allahabad.

Mahadevbhai completed his LLB in 1913 scoring the highest marks in the University in the subject of Equity. His close friend Narharibhai Parikh, who was to join Gandhiji a few months before Mahadevbhai joined the Mahatma, too passed the LLB examination the same year. Mahadevbhai joined Narharibhai in Ahmedabad in 1915 to practice law in the district court. His father Haribhai had come to Ahmedabad a year before in 1914 on his posting as the headmaster of the women’s teachers’ training school.

In Ahmedabad, while most lawyers took membership of the Gujarat Club, Mahadevbhai chose to become member of the Himabhai Institute, known for its rich collection of books. As both Narharibhai and Mahadevbhai did not have much of a legal practice, they devoted most of their time after reading literature – Gujarati, Hindi, Bengali and English. Both wanted to translate into Gujarati the complete works of poet laureate Rabindranath Tagore, a wish they could not fulfil because of their total dedication to the freedom struggle and in the service of Mahatma Gandhi.

Before he joined Gandhiji in the first week of November, 1917, Mahadevbhai had to take up a job when, after his father Haribhai’s retirement, it became difficult to survive in Ahmedabad on his meagre income from practice in law. So when his classmate and close friend Vaikunthbhai Mehta, who was manager of Bombay Central Co-operative Bank, offered him the position of inspector of the bank, he readily accepted it. As inspector, his work involved supervising the functioning of various co-operative banks of Maharashtra and Gujarat regions. His work took him to remote villages of Gujarat and Maharashtra, often on a bullock cart, where he polished his Marathi language, learning even its finer nuances. His knowledge of Marathi impressed even an eminent litterateur such as Kakasaheb Kalelkar and enabled him reply to letters written to Gandhiji in chaste Marathi after he joined him as his secretary.

His flair for literature found reflection also in his routine reports to the head office of the co-operative bank. “Even in his official communications his literary style and his handwriting impressed all in our office. Although he had to suffer a number of hardships in his travels, we could notice in his letters depth of feeling and a natural love for village life. I cannot say whether Mahadev was more of a poet than a philosopher, but I could definitely notice the hidden poet in the descriptions we have in his letters. In college, I knew him as a person of studious habits who was interested in wide reading; my contact with him now showed me that he possessed the highest literary art. He had as much command of English as he had of Gujarati,” writes Vaikunthbhai Mehta, who was Mahadevbhai’s senior in the co-operative bank.

About Mahadevbhai’s command of the English and Gujarati languages, his life-long friend and editorial colleague at Gandhiji’s weeklies, Navajivan and Young India, Swami Anand writes: “His Oxford English was fashioned after leading newspapers of England, Times and Manchester Guardian. His English was high class, without mistake and his style of writing critical and analytical articles superb. His courteous language echoed that of Gandhiji. His Gujarati writing was devotional, classic and flawless. Yet when occasion demanded he expose the injustice, tyranny and devilry of the British Empire in a language that left the rulers fuming.”

About Mahadevbhai’s vast reading, Swami Anand says: “His reading comprised of literature as well on the current political happenings. One could know from him the latest political moves and undercurrents – both national and international – concerning India. He could be seen reading latest newspapers, monthlies and books, which he carried in his bag, and writing articles for Young India and Navajivan, during public meetings, sessions of various committees and even while seated on the bunk of a running train.”

Mahadevbhai’s handwriting rivalled that of an expert calligraphist. He did not know shorthand, though his diary reveals that during his imprisonment in Belgaum jail he had completed as many as 25 lessons from Sir Isaac Pitman’s shorthand textbook. Recounts Swami Anand: “Leading national and international statesmen, diplomats, veteran journalists from newspapers around the world, officials of international organisations, clerics and authors would come to meet Gandhiji. They and their assistants would take down in shorthand the account of their conversation with Gandhiji while Mahadev, sitting in a corner, would be taking notes in most legible long hand. They would go back to their lodging, get the transcript typed and when they come back to get these okayed by Gandhiji he would find many mistakes in their copy. Mahadev’s notes, on the other hand, would be flawless. Gandhiji would say to them, “You should have compared your transcript with Mahadev’s notes”. And, the visiting dignitaries would be left dumbstruck. Eminent journalists such as Louis Fischer and Gunther used to hesitate in going to Gandhiji for his approval without cross checking their notes with Mahadev’s.”

His sharp observation, vast reading, capability of taking down notes with extraordinary speed, eye for details, understanding of a variety of subjects, command of multiple languages, amiable nature that instantly won for him the confidence of people, his unshakable commitment to truth and complete devotion to Gandhiji, all these combined together made Mahadev an extraordinary journalist who chronicled India’s history as it happened during the 25 eventful years between the Champaran satyagraha of 1917 and the Quit India movement of 1942 and in the process, as eminent anthropologist Verrier Elwin said, “Made Gandhiji the most best known man in the world, certainly the best loved.”

1 thought on “Gandhiji would say to them, “You should have compared your transcript with Mahadev’s notes”.”