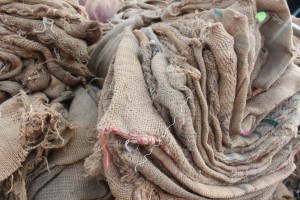 New Delhi: Cent per cent food grains and 20 per cent of sugar will now be mandatorily packed in diversified jute bags. The decision is taken today in order to sustain the core demand for the jute sector and to support the livelihood of the workers and farmers dependent on the sector since the jute industry is predominantly dependent on Government sector which purchases jute bags of value of more than Rs. 7,500 crore every year for packing foodgrains.

Approving norms for mandatory packaging in jute materials to, the Cabinet Committee on Economic Affairs chaired by the Prime Minister Narendra Modi, today  further stated that the decision to pack sugar in diversified jute bags will give an impetus to the diversification of the jute industry. Further, the decision also mandates that initially 10% of the indents of jute bags for packing foodgrains would be placed through reverse auction on the Gem portal. “This will gradually usher in a regime of price discovery,” a Ministry of Textiles release stated, adding that the Government has expanded the scope of mandatory packaging norms under the Jute Packaging Material (JPM) Act, 1987.

In case of any shortage or disruption in supply of jute packaging material or in other contingency/exigency, the Ministry of Textiles may, in consultation with the user Ministries concerned, relax these provisions further, up to a maximum of 30% of the production of foodgrains over and above the provisions.

Nearly 3.7 lakh workers and several lakh farm families are dependent for their livelihood on the jute sectors. The ministry stated that considering this fact, the government had been making concerted efforts for the development of jute sector; increasing the quality and productivity of raw jute, diversification of jute sector and also boosting and sustaining demand for jute products.

The approval, the Ministry stated,  would benefit farmers and workers located in the Eastern and North Eastern regions of the country particularly in the states of West Bengal, Bihar, Odisha, Assam, Andhra Pradesh, Meghalaya and Tripura.

It may be mentioned that in order to improve the productivity and quality of raw jute through a carefully designed intervention, called the Jute ICARE, the Government has been supporting close to approximately two lakh jute farmers by disseminating improved agronomic practices such as line sowing using seed drills, weed management by using wheel-hoeing and nail-weeders, distribution of quality certified seeds and also providing microbial assisted retting. “These interventions have resulted in enhancing the quality and productivity of raw jute and increasing income of jute farmers by Rs. 10,000 per hectare,” the Ministry informed.

Recently, the Jute Corporation of India had entered into MoU with National Seeds Corporation for distribution of 10,000 quintals of certified seeds on commercial basis also. and the Ministry expects that this intervention of technology up-gradation and distribution of certified seeds would increase the productivity and quality of jute crops and also increase the income of the farmers.

Besides, with a view to support diversification of jute sector, the National Jute Board had collaborated with National Institute of Design and a Jute Design Cell had been opened at Gandhinagar. Further, promotion of Jute Geo Textiles and Agro-Textiles had been taken up with the State Governments particularly those in the North Eastern region and also with departments such as Ministry of Road Transport and Ministry of Water Resources.

“With a view to boost demand in the jute sector, Government of India has imposed Definitive Anti-Dumping Duty on import of jute goods from Bangladesh and Nepal with effect from January 5, 2017,” the Ministry pointed out, and also referred to Jute SMART, an e-govt initiative was launched in December, 2016, to provide an integrated platform for procurement of B-Twill sacking by Government agencies, with a view to promoting transparency in jute sector. “Further, the JCI is transferring 100% funds to jute farmers online for jute procurement under MSP and commercial operations,” the Ministry stated.