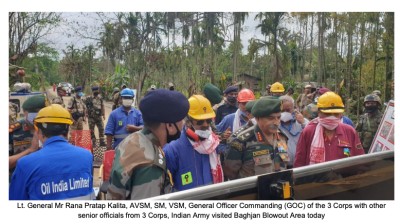 Tinsukia:  While efforts are on to cap the gas well – Baghjan-5 – of Oil India Limited (OIL), the Detailed Plan has been drawn with the help of Indian and foreign experts to control the flow of gas from the well and to cap it.  Officials say the plan is being executed as per the prepared schedule and it is proposed to cap the well on July 7, this year after taking all necessary safety precautions.

It may be mentioned that uncontrolled gas started leaking from this well on May 27 this year.  Thereafter while preparation was going on to control the leak, the well caught fire on June 9, killing two firemen. Environmentalists and  locals had protested the entire project since its initiation.

An OIL spokesperson stated on Friday that because of the mishap,  Operations were disrupted in 33 Oil wells and 5 gas wells. Cumulative production loss since 27th May, 2020 due to bandhs and blockades was of 7042 MT Crude oil, and 9.23 MMSCM of natural gas.

Already the incident has forced over 9,000 people living in the surrounding area shift to relief camps set by the State Government in collaboration with OIL, and they are still there. As an immediate relief measure, Rs. 30,000 each has been sanctioned for 1610 families identified by District Administration. On Friday a team of doctors led by Dr Pranjit Pran Baruah, General Manager (Medical Services), OIL visited the relief camps to check up health and hygiene condition of the camps. Besides, two Food Safety Officers from Joint Director of Health Services, Tinsukia District office too visited the relief camps to check the food quality provided in the camps. A survey for assessment of damage for compensation to the victims has been initiated by a committee constituted by District Administration.

On Thursday, Prime Minister Narendra Modi had reviewed the situation and assured the people of Assam through Chief Minister Assam that Government of India was “fully committed to providing support and relief & rehabilitation to the affected families and is standing with the State Government in this difficult time due to the unfortunate incident that has taken place”. Modi had also directed the Petroleum and Natural Gas Ministry to study and document this incident “so that further capacities and expertise could be developed “within our own organizations to avoid such mishaps in future and deal with such calamities in case they occur”.

Multiple agencies have been deployed to assess the environmental impact at the nearby ecologically-sensitive Dibru-Saikhowa National Park and Maguri–Motapung Beel in Tinsukia district. While TERI has been installing units for Particular Matter, SOx, NOx measurement at Baghjan, an Environment Impact Assessment study team of ERM India Private Limited has been collecting sample at Dibru-Saikhowa National Park & Maguri–Motapung Beel. TERI was also studying air quality and  noise level and was making arrangements for placing the equipment for monitoring of air quality and noise level.

While TERI alongwith OIL is also studying on bioremediation of sludge, the former is also carrying out inspection and assessment of land area and water bodies including the area near Maguri Motapung bridge due to the blowout incident. CSIR-NEIST is conducting seismological study for the civil work for installation of equipment in new locations. Installation of Broadband seismograph and equipment is in progress at Kaliapani Eco Resort Project. Data acquisition has begus at Limbuguri Tea Estate.

In the meantime, Army has been assisting in construction of the Baily Bridge at the site and Lieutenant General Rana Pratap Kalita,  General Officer Commanding (GOC) of the 3 Corps, along with other senior officials from 3 Corps of Indian Army visited the Blowout Area at Baghjan to monitor the progress of work at ground zero on Friday. The  army had sent materials to construct the bridge by 15 trucks and materials were yet to be unloaded from four of these trucks at Baghjan at the time of going to the press. Moreover, a  total of 34 numbers of heat shields for Indian Army personnel are handed over and fabrication of additional numbers of heat shields are in progress at OIL’s Engineering Workshop. Erection of heat shield in front of debris area is completed, an OIL spokesperson stated on Friday.