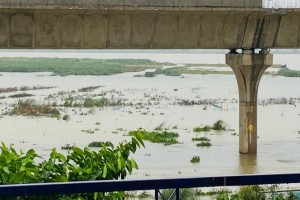 Patna: The flood water has gushed into dozens of villages of Bagaha in Bihar’s West Champaran district as 4.16 lakh Cusecs of water was released from Valmikinagar Gandak barrage on Tuesday even as flood threat looms large over  in other districts of north Bihar.

Two major rivers in north Bihar- Gandak and Kosi are in spate as water resources department has issued high alert in six districts of north Bihar and riverine belt of Kosi. In view of Kosi river being swollen due to heavy rainfall in Nepal, 48 out of 56 gates of the barrage have been opened. According to Indian Meteorological Department (IMD), entire Bihar is likely to witness downfall in the next three days.

Special arrangements have been made for the monitoring of embankments in the districts concerned following the issuance of alert. Block development officers and circle officers are appealing people through public address system living in the low lying areas, being affected by release of water, to shift to higher places.

Disaster Management Department’s Additional Secretary Ramchandra said that five blocks each in Sitamarhi, Supaul and Darbhanga districts, four blocks each in Kishanganj and Gopalganj districts, three blocks each in Sheohar, East Champaran, Muzaffarpur districts. At least 156 Panchayats in 32 blocks of 8 districts are affected by flood in the state presently. Relief camps have been opened in the affected areas.