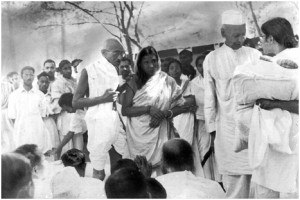 My Grandmother Malati Choudhury: A tribute on her 116th birth anniversary (on July 26)

Malati Choudhury (née Sen) was born in 1904 in an aristocratic Brahmo family. She had lost her father, Barrister Kumud Nath Sen, when she was only two and a half years old, and was brought up by her mother Snehalata Sen.

Being the youngest child of her parents, she was a darling of all her brothers and sister. Her mother Snehalata was a writer in her own right, and had translated some works of Tagore, as is seen from her book Jugalanjali. It is hard to believe that coming from a highly westernized and aristocratic family, Malati Choudhury could adopt a completely different life style.

In an article entitled ‘Reminiscences of Santiniketan’, her mother had written: “Malati was very happy and benefited much from her residence at Visva Bharati as a student. The personal influence of Gurudev and his teachings, his patriotism and idealism, have influenced and guided Malati throughout her life.”

She had been fortunate enough to have been deeply influenced by both Tagore and Gandhi. It was the former at whose feet she learnt and acquired some rare values and principles of education, development, art and culture, which had been the guiding principles in her life; and it was the latter who had a magic spell on her and at whose instance she plunged herself in the freedom struggle. Malati came to Santiniketan in 1921, when she was sixteen, and lived there for a little more than six years. In those days Santiniketan was small and beautiful.

There were nine girls of her age living in the hostel called Notun Bari (new house) – Manjushree, Surekha (who later on became her sister-in-law), Eva, Satyabati, Latika, Saraju, Tapasi, Amita (mother of Professor Amartya Sen) and herself. They were attending classes in the open under the trees, learning embroidery, handicrafts, music, dancing, painting and gardening. Leonard Knight Elmhirst, an Englishman, was in charge of the Agricultural Institute at Surul in Sriniketan, and he used to encourage them in gardening.

Mr. Pearson, another Englishman, was also teaching them. It was from him that Malati got the inspiration to work for the tribals. Gurudev used to take classes on Balaka, when he was reading his poems from his book ‘Balaka’, and was explaining the same to them. Miss Stella Kramisch, who came to India at Gurudev’s invitation, taught them the principles of Indian Art and dancing. They were really happy in those days at Santiniketan.

During her stay at Santiniketan as a student, a young man from a well known family of Orissa, Nabakrushna Choudhuri, came there as a student. He came from Sabarmati Ashram at the instance of Gandhiji, to study at Santiniketan. There was also G. Ramachandran, B. Gopala Reddy, and Syed Mujtaba Ali. They are no more.

She got engaged to be married to Nabakrushna Choudhuri, and left Santiniketan in 1927. This was a turning point in her life. After her marriage, Orissa became her home and her area of activities. They settled in a small village named Anakhia, now in the Jagatsinghpur District of Orissa, where her husband started improved sugarcane cultivation. Apart from agriculture, establishing rapport with the surrounding villages was their main concern. In their concept and scheme of rural reconstruction, it is the people who were at the center of activities. Their development depended on their empowerment, which was again the result of education. They had started adult education work in the neighbouring villages.

Soon came the Salt Satyagraha, and they jumped at that. It was the greatest movement of mobilization and motivation, which were the dynamic components of adult education. During the freedom struggle they were activists using the principles of education and communication in creating a conducive environment for Satyagraha. Even as prisoners in the respective jails, they continued the educational activities like teaching fellow prisoners, organizing choral singing and disseminating Gandhiji’s teachings.

Malati Choudhury and Nabakrushna Choudhuri, in February 1933, organized the Utkal Congress Samajvadi Karmi Sangh, which later became the Orissa Provincial Branch of the All India Congress Socialist Party. After independence, Malati Choudhury got opportunities of translating her ideas into practice. As a member of the Constituent Assembly of India, and as the President of the Utkal Pradesh Congress Committee, she tried her best to emphasize the role of education and adult education in rural reconstruction.

When Nabakrushna Choudhuri became the Chief Minister of Orissa in 1951, she was assertive enough to focus the plight of the have-nots, particularly those belonging to the scheduled castes and scheduled tribes. Eventually she decided not to join politics, because Gandhiji had advised that all Congress activists need not join politics, but should work for and with the people with service as their goal.

Gandhiji used to call her \”Tofanee\” She was Tagore’s favourite \”Minu\” As a young student at Santiniketan, she was quite famous for her outgoing personality, taking active part in Gurudev’s dance dramas and music sessions, as well as initiating innocent mischiefs in the community. Proverbial courage, sheer dynamism and a strong zeal to fight for the rights of the oppressed and have-nots were the dominant features of her character. She was frank and outspoken, and was never afraid of calling a spade a spade.

In 1934, she had accompanied Gandhiji in his “padayatra” in Orissa. After a daylong walk, he was obviously too tired to visit a Harijan village which was in his itinerary. The villagers, who had waited long, were disappointed, but were prepared to forgive Gandhiji for the minor lapse. Malati Choudhury did not spare Gandhiji, and told him point blank, “Bapu, you have not done the right thing.” Gandhiji apologized, and cooled her down with his disarming smile.

Even before Independence, she had established the Bajiraut Chhatravas at Angul in Orissa in 1946, and the Utkal Navajeevan Mandal, also at Angul, in 1948. The Bajiraut Chhatravas had its genesis in the Prajamandal Movement ( the resistance movement organized and sustained by the people ) and its initial activities were geared towards providing residential facilities and educational opportunities to the children of Freedom Fighters.

Over the passage of time, there was a societal demand on the Bajiraut Chhatravas to provide educational facilities to the children belonging to scheduled castes, scheduled tribes, other backward classes and underprivileged sections of society coming from all over Orissa. Established in the memory of the twelve-year old boy Bajiraut, who sacrificed his life by disallowing the British forces to cross the river Brahmani by boat, the Bajiraut Chhatravas has become an institution of national importance. The Utkal Navajeevan Mandal is a voluntary organization of repute, engaged in rural development and tribal welfare in the rural and tribal areas of Orissa.

The State Resource Centre for Adult Education, which was established by the Government of India, under the auspices of the Utkal Navajeevan Mandal, at Angul in 1978, had done pioneering work in Adult Education.

Honours and Awards came to Malati Choudhury in quick succession: National Award for Child Welfare (1987), Jamnalal Bajaj Award (1988), Utkal Seva Sammaan (1994), Tagore Literacy Award (1995), Honour by the Lok Sabha and Rajya Sabha on the occasion of the 50th Anniversary of the first sitting of the Constituent Assembly (1997), Honour by the State Social Welfare Advisory Board (1997), Honour by the Rajya Mahila Commission (1997), and last but not the least, the ‘Deshikottama (D.Litt. Honoris Causa) from her Alma Mater, Visva-Bharati.

In 1988, she refused to receive the prestigious Jamnalal Bajaj Award from the hands of the then Prime Minister Rajiv Gandhi, because, according to her, Rajiv Gandhi had not done anything to promote Gandhian values.

On receiving the Tagore Literacy Award given by the Indian Adult Education Association, she had said: “I feel doubly honoured to receive the Award, which is named after Kabiguru Rabindranath Tagore, to commemorate his memorable achievements in bringing a synthesis among culture, music and aesthetics in evolving and practising his unique philosophy and principles of education. Like Rousseau, Gurudev did not want purposefulness, belonging to the adult mind, to be forced upon the children in school. He believed that once purposefulness was introduced, it brought torture to the child, as it went against the purpose of nature.

“According to Tagore, nature was the greatest of all teachers for the child. He had tremendous faith in the educational value of natural objects. Natural events like the beautiful sunrise and sunset, blossoming of flowers and singing of birds are the learning resources for children possessing the natural gift of learning things very easily.”

“He had a great faith in the children’s natural way of learning. He did not insist on forced mental feeding as a result of which lessons become a form of torture. Gurudev considered artificial feeding of the mind to be of man’s most cruel and wasteful mistakes. According to him, the greatest possible gift for children was their own freedom to grow. Tagore also wanted the children to have another kind of freedom – the freedom of sympathy with all humanity, a freedom from all national and racial prejudices. Thus, his philosophy of education is based on the ideal of the spiritual unity of all races.”

She had also said, “ Rabindranath was always following the ideal to realize, in and through education, the essential unity of man. The way in which he achieved that unity gave him a deep insight into the object of education and its problems.”

Malati Choudhury had organized the ‘Krusaka Andolana’ (Farmers Movement) as a part of the freedom struggle against the Zamindars, Landowners and Moneylenders, who were exploiting the poor. She had seen and experienced the untold sufferings of the people while walking through many villages in Orissa. She had also realized that women were victims of many superstitious beliefs, and they alone were to fight against the same for their own empowerment.

As a member of the Constituent Assembly of India, she used to feel restless, because she was not in tune with the wavelength of other members; and when Gandhiji’s famous Noakhali yatra began, she joined the same at the instance of Thakkarbappa. A dynamic person like her did not slow down her efforts after the Bajiraut Chhatravas, Utkal Navajeevan Mandal and the Postbasic School at Champatimunda, near Angul, were established. She had joined the Bhoodan Movement of Acharya Vinoba Bhave.

During the Emergency she raised her voice against the anti-people policy and oppressive measures adopted by the Government and was imprisoned. Malati Choudhury was a legendary figure. She had lived an eventful life of ninety-three years.

1 thought on “First Person: Gandhiji used to call her Tofanee and she was Tagore’s favourite” 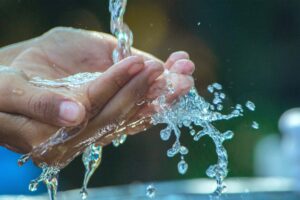