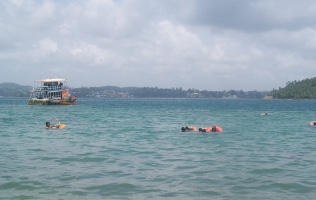 Covid-19 and lockdown has affected tourism like never before. It is not safe to travel at present. However, we wish to believe that this is a passing phase. Soon things will become normal and people would love to visit exotic places. It is good to share my experience as a traveler as I am sure that those who have not visited these islands would surely love to visit these places someday. So here it is.

Andaman is for relaxation. It is also honeymooners’ delight. But then, that’s not all about fun and frolic. As we arrived at Port Blair, our first stop was Central Jail. The moment we entered the prison, we could feel the way our freedom fighters were tortured when they battled for India’s Independence. From Veer Savarkar to Batukeshwar Dutt, hundreds had faced the same ordeal during Kala Pani here. The light and sound show that happens each night here made tears come out of our eyes. Andaman was the dreaded Kala Pani of the British imperialistic regime. But now it is among the the favorite tourist destinations in the country. It is not devoid of activities that attract tourists. The island offers its vacationers different methods of entertainment to chill out – Andaman Water sports complex,  Anthropological Museum, Chatham Saw Mill, Chidiya Tapu, Corbyn’s cove, Fisheries Museum, Forest Museum, Mahatma Gandhi Marine National Park,   Mini Zoo,    Naval Museum (Samudrika), and the fabulous beaches.

The  green/blue water of the Bay of Bengal and the Andaman Sea gives it a picturesque setting. From various types of flora and fauna to the captivating caves, excellent spots, Andaman is never without shocks. The islands have a tropical rainforest canopy, made of a mixed flora with elements from Indian, Myanmar, Malaysian and endemic floral strains. It is home to  about 2,200 varieties of plants, out of which 200 are endemic and 1,300 do not occur in mainland India. The tropical rain forest is also rich with a diversity of animal life and about 50 varieties of forest mammals are found here including the rare Andaman wild boar. 26 species of rodents and 14 species of bats are also found here. The place also have saltwater crocodiles. However the state animal of Andaman is the dugong, also known as the sea cow, which can be found in Little Andaman. Besides, elephants are also there in the forests and mountains as they were brought over from the mainland to help with timber extraction in 1883.

Coming to Andaman is amazingly simple: just take a flight from any major Indian city or take a ship to Port Blair which are available from Kolkata, Chennai and Visakhapatnam.

There are numerous spots to visit in Andaman. One of them is Ross Island, which is one of the most well-known islands in Andaman. Just 3 km east of Port Blair, it was the central station of the region before Port Blair. The island isn’t just stunningly beautiful but the graveyards of our martyrs there, and an exhibition hall sordidly reminded us of the history that it shares. We had a terrific view of the Bay of Bengal from the highest point of the peak about 10 meters tall, there.

Andaman offers many novelties and Mud Volcanoes are among them. There are in excess of 25 mud volcanoes situated in Andaman, yet the greater part of them are found in Diglipur and Baratang Island. Specific gases like hydrocarbon and Methane are responsible for this wonder. We visited the island, as there was no issue seeing it.  We were thrilled to trek to the volcanoes. The separation between Diglipur Island and Port Blair is around 350 km north and we could reach there by a ship.

Our next destination, the following day was the Havelock Island, which is one of the key attractions in Andaman. A ship ride took us there and the vibes at the Island were totally mysterious. We visited Radhanagar Beach where we enjoyed scuba diving and swimming. In fact Radhanagar is ranks the eighth-most beautiful seashore in the world.  The entire region is  secured by tropical woods and the stone blue water of the Bay of Bengal adds magnificence of the seashore. Even in July when it was raining heavily, we had no issue visiting the seashore since the majority of the seashores of Havelock island stay open in the storms with the exception of the elephant seashore. There are coast guards whose presence in large numbers too was very reassuring.

We had the good fortune of visiting Baratang Island also which is about 100 kms from Port Blair and is surrounded by mangroves. The island is the home to the Jarawa tribals. There are various limestone caves here and it is fun exploring this island.

Andaman and Nicobar islands are a group of islands at the juncture of the Bay of Bengal and the Andaman Sea, comprising  572 islands. Only 38 of these islands are inhabited.  For visiting a few natural zones and tribal areas here one needs an extraordinary license from the Deputy Commissioner in the capital, Port Blair. Unlike Indian tourists, foreigners require a license to visit these spots. It is worth all efforts to spend time in these serendipity islands.

1 thought on “Destinations: Where the Bay meets the Sea”