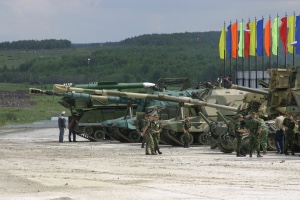 By Deepak Parvatiyar and Venkatesh Raghavan

The United States President Joe Biden today said the threat of a Russian invasion on Ukraine was “very high”, and ruled out talking to his Russian counterpart Vladimir Putin “right now”.

Talking to media at the South Lawn of White House in Washington today, Biden claimed Russia had not moved any of their troops out, but instead, had moved more troops in. “We have reason to believe that they are engaged in a false-flag operation to have an excuse to go in. Every indication we have is they’re prepared to go into Ukraine, attack Ukraine,” he said. When asked whether the attack was going to happen now, he said, “my sense is this will happen within the next several days”.

Biden though said still there was a diplomatic path available to avert the crisis. “There’s a clear diplomatic path.  That’s why I asked  Secretary [Antony J.] Blinken to go to the United Nations and make his statement today.  He’ll lay out what that path is.  I’ve laid out a path to Putin as well on, I think, Sunday.  And so, there is a path.  There is a way through this, but by diplomacy,” he said and added that he was waiting for a response from Putin for his letter.

Also read: With China by its side, Russia mocks media but tension with Ukraine is real

Blinken later today informed the United Nations Security Council in New York that today he had sent a letter to Russia’s Foreign Minister Sergey Lavrov proposing that they meet next week in Europe, following on their talks in recent weeks, to discuss the steps that they can take to resolve this crisis without conflict.  “We are also proposing meetings of the NATO-Russia Council and the OSCE [Organization for Security and Co-operation in Europe] Permanent Council,” he said adding that these meetings can pave the way for a summit of key leaders, in the context of de-escalation, to reach understandings on our mutual security concerns.

Earlier today, the US State Department condemned Russia stating that “Everything from human rights and environmental policy to assassinations and civilian-killing bombing campaigns are fair targets in Russia’s malign playbook”.

Responding to Russia’s criticism of Western media that it was whipping up hysteria, the US State Department counter-attacked stating, “Disinformation is one of the Kremlin’s most important and far-reaching weapons. Russia has operationalized the concept of perpetual adversarial competition in the information environment by encouraging the development of a disinformation and propaganda ecosystem. This ecosystem creates and spreads false narratives to strategically advance the Kremlin’s policy goals. There is no subject off-limits to this firehose of falsehoods.”

The US State Department stated, “Truth disarms Russia’s disinformation weapons. The Kremlin creates and spreads disinformation in an attempt to confuse and overwhelm people about Russia’s real actions in Ukraine, Georgia, and elsewhere in Europe. Because the truth is not in the Kremlin’s favor, Russia’s intelligence services create, task, and influence websites that pretend to be news outlets to spread lies and sow discord. Disinformation is a quick and fairly cheap way to destabilize societies and set the stage for potential military action. Despite having been exposed for engaging in these malign activities countless times, Russia continues to work counter to international norms and global stability.”

Biden too made a veiled attack on Russia without naming it in an earlier statement today. He said“There is truth and there are lies. Lies told for power and for profit. And each of us has a duty and responsibility, as citizens, as Americans, and especially as leaders – leaders who have pledged to honor our Constitution and protect our nation — to defend the truth and to defeat the lies.”

Secretary of State Blinken issued another statement that said: “We see a significant effort to push propaganda against Ukraine, NATO, and the United States. That includes malign social media operations, the use of overt and covert online proxy media outlets, the infection of disinformation into TV and radio programming, hosting conferences designed to influence attendees into falsely believing that Ukraine – not Russia – is at fault for heightened tensions in the region, and the leveraging of cyber operations to deface media outlets and conduct ‘hack and release’ operations – that is, hacking, and then releasing private data and communications.”

In the meantime, China stood for Russia again today demanding the US to “value and accommodate Russia’s legitimate and reasonable” concerns over security protection and play a constructive role for all parties to seek a political settlement to the Ukraine issue on the basis of the Minsk-2 agreement, rather than hype up and sensationalize the crisis and escalate tensions.

It may be mentioned that yesterday, Russian foreign office spokesperson Maria Zakharova had stated that “this week what was witnessed was the culmination of a misinformation campaign, launched by the West, on Russia’s mythical “invasion” of Ukraine.”

Russia maintained the stand and its foreign minister Sergey Lavrov again said during talks with Italian Minister of Foreign Affairs and International Cooperation, Luigi di Maio, in Moscow today, “This entire situation is not developing here in Russia but in the minds and media of the West, above all the United States and Great Britain.”

Supporting Moscow on the purported Western propaganda, Beijing stated disseminating disinformation and creating an air of tension was not conducive to resolving the Ukraine issue. “Clamouring for bloc confrontation and wielding the big stick of sanctions will only impede dialogue and negotiation,” Chinese foreign ministry spokesperson Wang Wenbin told reporters in Beijing today. He asserted that China supports all efforts in keeping with the direction and spirit of the Minsk-2 agreement.

The fulcrum is Donbas, a historical, cultural, and economic region in south-eastern Ukraine, some of whose territory is occupied by two unrecognized separatist states, the Donetsk People’s Republic and the Luhansk People’s Republic. Here Russian-backed separatists have been at war with the rest of Ukraine since 2014. The Minsk II agreement, signed in 2015, including by a Ukrainian negotiator, was meant to stop the fighting. However, its critics, many in Ukraine too, see the Minsk agreement as a vague document, which is difficult to be implemented in its present form. It falls short of defining what follows the ceasefire and does not explain meanings of terms used there such as “special status” for the renegade regions, or “elections” as to who can vote there, or “representatives” who would help write a new constitution. Such vagueness has only helped the two warring camps – Russia and the West.

The saga of Ukraine as an independent state that broke away from the erstwhile Soviet Union commenced in 1991. Prior to this, Ukraine could survive as an independent nation only in two brief instances. The first instance was way back in the 1600s and the second instance was for a short span of time after World War I. The nation-state, though independent, suffered owing to financial weakness besides comprising a demographic divide between Pro-Russian and Pro-European forces at play.

The genesis of the recent standoff between Russia and Ukraine can be traced to November 2013, when the then-President Viktor Yanukovych favoured a Pro-Russian stand tilting against the country having close ties with the European Union. A large section of the locals was unhappy with his pro-Russia positioning and it led to sporadic violence precipitated by mass street protests.

The agitation resulted in the overthrow of the Yanukovych run government in February 2014.  In the subsequent month, the Russian military annexed Crimea. Well into the spring of the year, the Russian military further intensified its operations resulting in more territorial losses for Ukraine from its eastern borders. It may be recalled that a civilian Malaysian aircraft was gunned down killing 298 passengers in mid-July that year and was attributed to a communication gap while the Russian military was monitoring Ukraine’s air space.

Soon the conflict turned serious when the Russia-backed rebel forces started losing out to the Ukrainian military. This made Russia opt for an overt invasion just before the fall of the year in August. At this point in time, the relationship between Russia and the Western bloc hit an all-time low, somewhat reminiscent of the cold war era. Subsequent imposition of sanctions on Russia by the Western powers had a crippling effect on its economy. Besides, the Ukrainian side suffered upwards of 2500 casualties in the conflict zone.

With a sharpening political divide, Russian President Vladimir Putin put across the view that Ukraine comprised what he termed Greater Russia and the Western powers had imperialistic designs to grab its territory. As of now, there is no sign of any let-up on hostilities. Global perspective sounds that there is no likelihood of Russia returning the conquered Crimean territory to Ukraine. Moreover, the building of troops on its border signals that a military design to conquer further territory from Eastern Ukraine might be in the offing.

It dates back to the days of divisive perceptions co-existing, with a huge chunk of its population regarding Moscow as an oppressor that needs to be resisted. The alternate perspective was that of the shared history and heritage that Ukraine shared with Russia. The growing domestic dispute that led to the ouster of the then Ukrainian president, witnessed a massive vote in favour of Crimea joining the Russian fold. However, the West disputed the voting mechanism stating it was held under heavy Russian military presence and Russia’s failure to permit international monitoring of the polls.

A low-level conflict way back in the spring of 2014 between the Ukrainian military forces and Russian backed rebels has now catapulted into a full-scale confrontation. The Russian militia is eyeing further territorial gains in Eastern Ukraine. As of now, whether Putin intends to press for more territorial gains in eastern Ukraine or just provide logistic support to the rebel elements in the territory is not very clear. However, the Western bloc despite sabre-rattling is not very keen on a direct confrontation with Russian military forces fearing a crisis that might precipitate World War III.