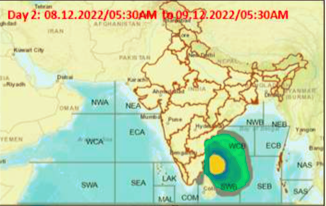 The India Meteorological Department stated that it will continue to move west-northwestwards and cross north Tamilnadu, Puducherry and adjoining south Andhra Pradesh coasts between Puducherry and Sriharikota with a maximum sustained wind speed of 65-75 km per hour gusting to 85 kmph around early hours of December 10, 2022.