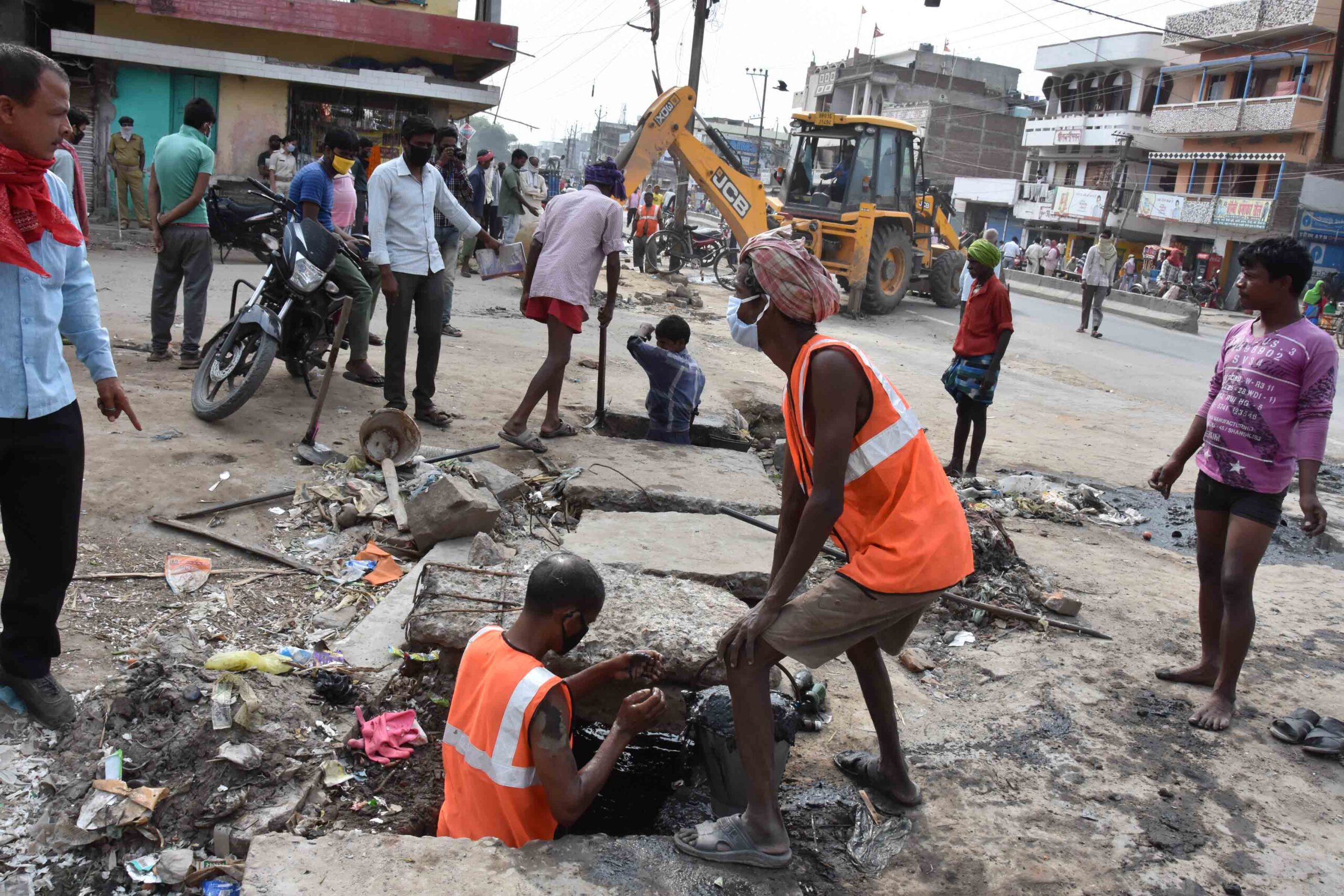 Patna Municipal Corporation employees cleaning the drain during a nationwide lockdown to in Patna on Friday. Photo by Ashok Sinha PHOTO BY-ASHOK SINHA

[the_ad_placement id=”adsense-in-feed”]Decision of lockdown was timely, the curve has begun to flatten, no need to fear of hidden spike in cases, the disease is in control: Chairman, Empowered Group 1

Recovery rate gone up to 20.57%, 3 more districts with no new case in last 28 days: Health Ministry

New Delhi:  Dr. V. K. Paul, Member of NITI Aayog and Chairman of Empowered Group 1, which is coordinating Medical emergency management plan, claimed on Friday that the decision of lockdown was timely and the curve has begun to flatten.He said, the lockdown had been effective in saving lives, containing COVID-19 infection and slowing down doubling rate. “As on March 21, our doubling time of cases was around 3 days, then results started showing on March 23, due to travel restrictions imposed earlier and on April 6, further slowing of doubling rate became visible,” he said. He claimed despite increase in testing, proportion of positive cases “has not increased”, and added that there was no need to fear of any hidden spike in cases and that “the disease is in control”. Stating that the government’s  testing strategy “has stood the test of time”, he claimed the volume of testing has been adequate.

Luv Aggarwal,Joint Secretary, Ministry of Health & Family Welfare, said as on today, there are 15 Districts that did not have a fresh case in the last 28 days or more. Durg & Rajnandgaon from Chattisgarh & Shivpuri from Madhya Pradesh have been added to this list, . He informed that further, now there were 80 districts where no case had been reported in last 14 days. Aggarwal too called for sticking to the collective efforts being undertaken by the community and government for breaking the chain of transmission of COVID-19.

Aggarwal also informed about Prime Minister Narendra Modi’s interaction with Panchayat sarpanches across the country through a video conference today, wherein the sarpanches shared their experiences and efforts to maintain lockdown measures. “The Prime Minister has appealed to the Panchayats to strengthen their infrastructure and exhorted every citizen to download the Corona tracker app “Arogya Setu” for better vigilance,” he said.

Besides, Aggarwal said, Health Minister Dr. Harsh Vardhan had an interaction with all the State Health Ministers, Ministers for Medical Education and Health Secretaries through Video Conference to discuss the management efforts for COVID-19. “The Union minister stressed the need for being constantly alert and requested States to focus on districts reporting a high number of cases or having a low case doubling time or districts where case mortality is high,” he said. The Health Minister also interacted with development partners, NGOs, social welfare organisations such as Rotary International and Red Cross Society and requested the Red Cross to ensure sufficient blood stocks by promoting voluntary blood donation and facilities for picking up and dropping to donors. He suggested Red Cross Society coordinate with recovered COVID-19 patients who can be mobilised for blood donation, from which convalescent plasma could be used for transfusion to Corona affected patients for early recovery. Dr. Harsh Vardhan  also announced the launch of the @CovidIndiaSeva Twitter handle to swiftly answer the questions of citizens.

Director, National Centre for Disease Control, S. K. Singh said  surveillance is being used to gather epidemiological intelligence in 734 districts and required measures were taken accordingly. He said while in the beginning airport data was being matched with community data. In a later stage, a live dashboard was formed which shows data captured from districts, along with data of logistics and hospitals, quarantine and isolation beds. He said Surveillance Network had been set up at district level as well, so that household survey, quarantine and isolation are done as part of cluster containment plan. “District level surveillance systems are an important unit of the surveillance system where District Collector works as a coordinator between health system and administrative system,” he informed, adding that around 9.45 lakh people are under the surveillance network at present, prompt samplings of these people are taken upon detection of symptoms. “Community surveillance is the weapon being used in most countries to fight COVID-19, so that infected persons can be quickly identified and put in quarantine or isolation so as to stop the spread,” he said. He explained that an important work of the surveillance system was to use epidemiological intelligence to predict how COVID-19 will progress and accordingly the number of hospital beds, quarantine facilities, logistical facilities that needed to be planned. “Surveillance system is leading to collection of data from states and effective analysis of data is being done, guiding further action. During initial period of lockdown, doubling time of cases decreased since people infected already were being detected, later it improved as lockdown put a brake on the spread of the infection,” he said.

In the meantime Joint Secretary, Ministry of Home Affairs,  Punya Salila Srivastava said the areas which are not within hotspots or containment zones have been given certain relaxations on the condition that all directives related to social distancing will be followed in those places.[the_ad_placement id=”sidebar-feed”]