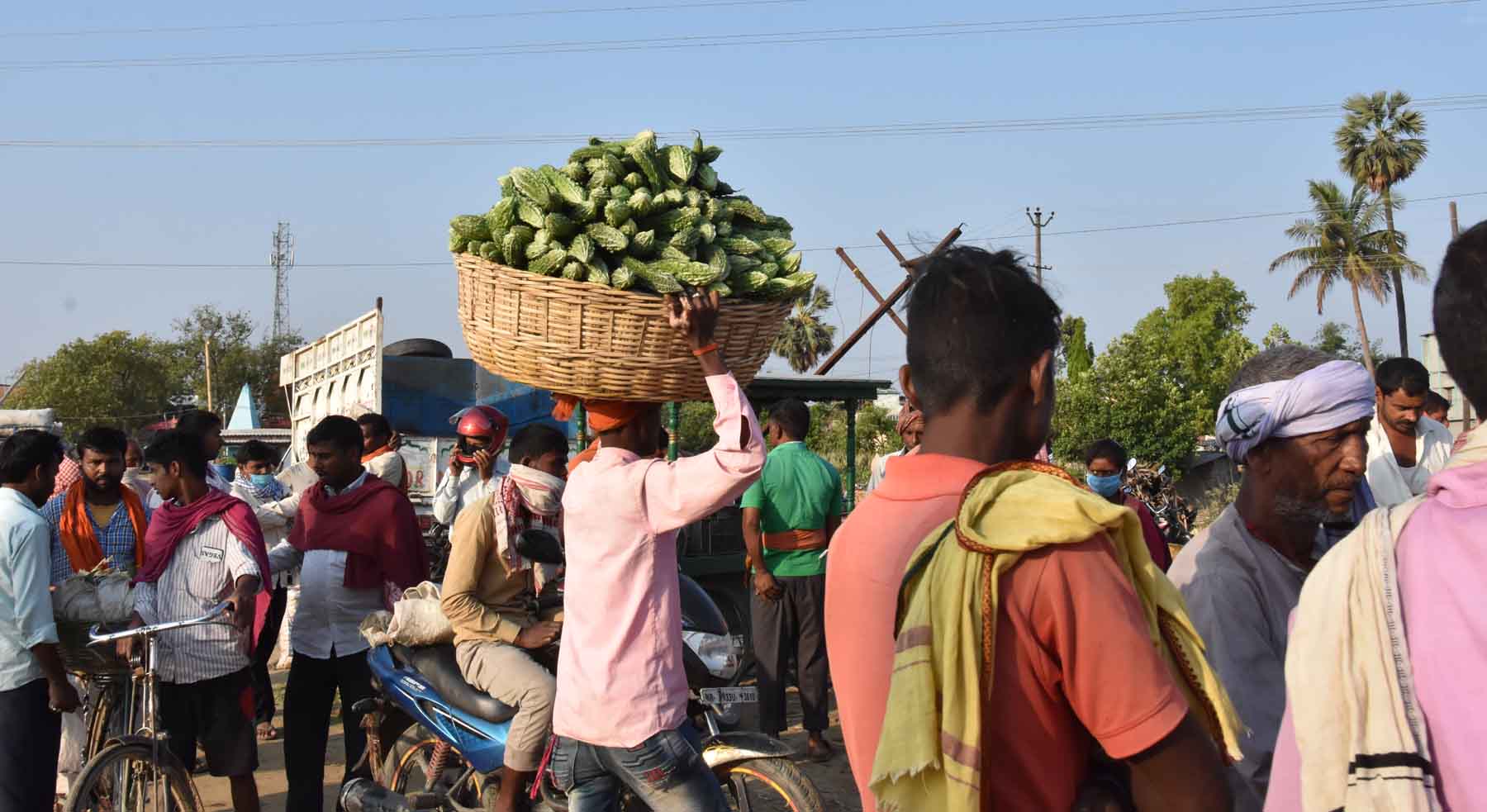 A farmer carrying his produce to the market in Patna during this lockdown period. Photo by Ashok Sinha

Bhartiya Kisan Union in a letter to PM claims, farmers are suffering

New Delhi: The Union Minister of Agriculture and Farmers Welfare,  Narendra Singh Tomar has said there was no shortage of food grains and pulses across the country while the Government has also ensured availability of vegetables and milk supplies. Addressing a press conference on Wednesday,  he said the government had laid priority on uninterrupted continuity of agriculture activities even during the lockdown.

Specific Exemptions made for Farming during Lockdown are as follows:

With a view to sustain and promote agricultural activities,  Tomar said, the Minimum Support Price (MSP) of Kharif and Rabi crops, including Paddy, wheat, pulses and oilseeds, was raised every season ensuring a level of 1.5 times of the cost of production. He said the hike in MSP for Rabi crops assured a return of 50% to 109%  over cost of production of various crops. He claimed that the centres for Rabi pulses and oilseeds had almost doubled from 1485 last year to 2790 this year.  “As the procurement picks up, more centers will be opened as per the requirement,” he added.

Tomar said the Government is encouraging technology driven solutions to minimize human interface in the farming sector especially in view of social distancing norms to fight the COVID19 pandemic. The technology initiatives of the Department of Agriculture, Cooperation and Farmers Welfare included Warehouse Based Trading module, Kisan Rath App, Fruit Products Order module which enables uploading of produce, bidding and payment from their Collection Centers directly. The minister said FPOs were also supplying vegetables in nearby cities and towns. All problems arising out of movement of goods and its trading are resolved on real time basis.  States have already taken decision to issue passes/e-passes to FPOs.

The Kisan Rath App, launched on April 17, 2020 is to facilitate Farmers and Traders in identifying right mode of transportation for movement of farm produce.  Besides,  an All India Agri Transport Call Centre was launched in April, 2020 for coordination between States for inter-state movement of perishables like vegetables & fruits, agriculture inputs. The Call Centre numbers are 18001804200 and 14488. Moreover, the minister informed, as follow up Budget announcement of KISAN Rail, during the lockdown period, Railways introduced 67 routes for running 567 Parcel Specials (out of which 503 were time table parcel trains) to supply essential commodities at fast speed. “These trains have transported 20,653 tonnes of consignments across the country,” Tomar said.

Also Read: Are government packages for farmers and poor enough?

The minister said the PM-KISAN scheme had benefited farmers immensely even during this COVID season as the Government  transferred Rs. 17986 crore to farmer since March 24, 2020. “Till date 9.39 crore farmer families have been benefitted and a sum of Rs 71000 crores has been transferred,” he said adding that the installment due for the period of 1st April to 31st July, 2020 had been paid to 8.13 crores beneficiaries within the first fortnight of April itself. “In view of the success of the scheme, the Prime Minister approved extension of the year-old-scheme to all farming families, since the original scheme covered only small and marginal farmers,” he said.

Tomar said the Government also launched the Kisan Credit Card (KCC) Saturation Drive in February 2020 for ensuring benefits of KCC to PM- KISAN beneficiaries. He informed that more than 75 lakh applications from PM-KISAN beneficiaries had been received by banks since then while nearly 20 lakh applications had been sanctioned with a total sanction amount of nearly Rs 18,000 crores.

The government has also made PM Fasal Bima Yojana voluntary for all farmers “considering the demand of farmers while there is no change in farmers’ share of premium”. Tomar said the Union Government will now bear 90% of premium subsidy liability for North Eastern States instead of 50% earlier. “Flexibility has been given to States to choose the risk covers and sum insured for benefit of farmers,” he said and further informed that  during 2017-19 while farmers’ contribution had been over Rs.9,000 crores, the crop insurance claims worth over Rs.50,000 crore had been dispensed to affected farmers. “Total claims paid during the lockdown period stand at Rs 5,326.7 crores,” he said.

Menwhile Ramesh Chand, Member, NITI Aayog, said the Agriculture sector will be the mainstay of India’s economy and the Government aims to keep the GDP growth buoyant during the current fiscal despite the lockdown bringing almost 60% industrial activity to a standstill. “A normal monsoon prediction and with 50-60% water available in reservoirs, Agriculture sector is expected to do exceedingly well,” he said.  He added that fertilizer offtake of 13.5 lakh metric tonnes this month upto April 28th was 5% more than 12.86 lakh tons in April last year while Krishi Vigyan Kendras had sold 20% more seeds in the four months this year as compared to the same period last year. “With higher prices of crops assured, this will encourage farmers and contribute to Agriculture growth estimated at 3% of long term average,” he said.

In the meantime, an influential farmers’ group, the Bhartiya Kisan Union (BKU) in a letter to Prime Minister Narendra Modi on Wednesday, reiterated its demand from the government to provide an economic package of 1.5 lakh crores to compensate farmers affected by COVID-19 pandemic. While welcoming the government’s lockdown move, the Union however pointed out that because of lockdown, it became difficult for farmers to get labours to harvest the crops standing in fields, which resulted in farmers facing “a massive crisis”.

The farmers’ union stated that due to untimely rains, the harvest of Rabi crops had already delayed by 15 days.  “Countrywide lockdown caused lack of transportation that led farmers growing fruits and vegetable crops either to let their crops rotted in the field. At the same time, fair prices of produce were not available in the markets due to lack of demands. As a result, farmers had no choice but to throw away or destroy their crops. There are reports of farmers across India throwing tomatoes, gourds, trumpets, cucumber, grapes, orange, litchi, etc. Due to which farmers are now in constrain to sow Kharif crop,” the BKU stated.

It the letter to the Prime Minister, the Union claimed that the farmers were in a dilemma “as the government is not taking the necessary steps to solve their problems”. Due to the lockdown, the letter stated, farmers who had grown vegetables and fruits, had lost 80 per cent of their crop while flower farmers and milk farmers 100 per cent and 50 per cent respectively.

Through this letter, Bhartiya Kisan Union made the following demands to the Prime Minister:

1. The Government of India should immediately provide an economic package of 1.5 lakh crores to compensate for the loss of fruits, vegetables, milk, poultry, fisheries, bee, spinach, and flower growing farmers.
2. The benefit of Kisan Samman Nidhi should be given to all farmers as the first instalment. The amount of Kisan Samman Nidhi should be increased from 6 thousand rupees to 24 thousand rupees.
3. Procurement should be arranged for all types of crops, including cotton, wheat, gram, mustard, etc. of farmers.
4. Farmers who have been facing bad weather for a long time should be given a bonus of Rs 200/quintal on wheat.
5. One year exemption on the interest of all types of loans taken by farmers and the availability of fertilizer for Kharif crop must be ensured.
6. Crop loan is taken by farmers producing fruits, vegetables and flowers should be waived.
7. Along with self-sufficiency of food grains in the country, pulses and edible oil should also be made self-sufficient. To eliminate the dependence of the country on agricultural imports, farmers should be encouraged and incentivized to produce edible oil and pulses. And their crops must be procured by the government.[the_ad_placement id=”sidebar-feed”]