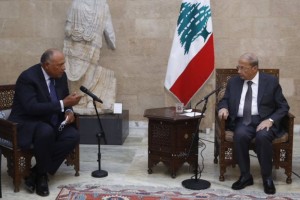 Beirut/New York/Geneva: Before announcing his cabinet’s resignation on Monday, Lebanese Prime Minister, Hassan Diab, blamed “chronic corruption in politics, administration and the State” for the explosion in Lebanon that last Tuesday that killed over 150 people, injured more than 6,000 and left over 300,000 people homeless.

The system of corruption is deeply-rooted in all the functions of the state and Diab said he discovered that the corrupt system was bigger than the State, and that the latter was constrained by this system and could not confront it or get rid of it.

“One of the many examples of corruption exploded in the port of Beirut, and the calamity befell Lebanon; but corruption cases are widespread in the country’s political and administrative landscape; other calamities hiding in many minds and warehouses, and which pose a great threat, are protected by the class that controls the fate of the country, threatens the lives of people, falsifies facts, survives on seditions and trades in people’s blood during periods of relinquishment which have become a pattern that repeat itself according to interests, impulses, calculations and fluctuating dependencies,” he said in his speech announcing his cabinet’s resignation.

Defending his position amidst widespread public protests over the twin blasts following a fire in a warehouse in the port area where 2,750 tonnes of confiscated ammonium nitrate were stored for six years. The country also faces soaring inflation and unemployment, Diab claimed that his government had gone to “great lengths “to lay out a road map to save the country. “Every minister in this government has done his very best…We have no personal interests… we have endured many false accusations and campaigns for the sake of saving the country. But we refused to be lured into futile polemics, for we wanted to work. Nevertheless, fury horns did not stop their attempts to falsify the facts in order to protect themselves and cover up their crimes,” he said.

Later Diab submitted his resignation to President of the Republic, Michel Aoun, who accepted the resignation.

In New York, the United Nations Secretary-General António Guterres briefed Member States on the situation in Lebanon. He said that Lebanon was going through a very difficult period. He assured the UN’s continued support to Lebanon “in every way possible through the current emergency and in these difficult times”. The Secretary-General in his remarks also called for robust international support for all people in need in Lebanon, especially women and girls who are most vulnerable in any time of crisis.  He urged donors to give speedily and generously.

He recalled that a Conference in support of Beirut, which was co-chaired by the United Nations and the French Government, generated much-needed financial support and reaffirmed the commitment of Lebanon’s many partners, including world leaders, international humanitarian organizations and key multilateral and regional financial institutions.

In Geneva, the World Health Organisation issued an appeal for $76 million US dollars  to the Lebanese people. WHO Director-General Dr Tedros Adhanom Ghebreyesus said that from its strategic stockpile in Dubai, the WHO had immediately sent surgical and major trauma supplies. “We released funds from the contingency fund for emergencies. And our staff are on the ground are supporting the assessment of the impact on the health sector with Lebanese and other UN partners,” he added. He further informed that the WHO was shipping $1.7 million dollars worth of PPE items to support COVID-19 and humanitarian supplies that were destroyed by the blast in Lebanon. “We are also working closely with national health authorities to enhance trauma care, including through the deployment and coordination of qualified emergency medical teams. We’re also mitigating the COVID-19 impact, addressing psychosocial needs and facilitating the rapid restoration of damaged health facilities.”