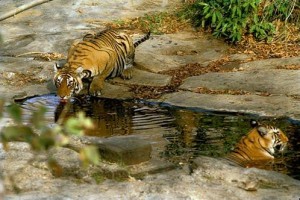 Travel With Me Series -2

“The Tiger a Gentleman? The Tigress is NO lady!”

“Tigers are one of the most beautiful animals on planet earth. They have been evoked in sacred books, literature, proverbs, stories and plays for their majestic strength and beauty “- Anonymous

With deep respects to the doubters, let us get to better understand and appreciate this saviour of our planet! …they do love a gentle massage, you do a good job and you can walk out to live

My first contact with the tiger in the wild, occurred over three decades back at the Jim Corbett, National Park. We were on an elephant safari; my in-laws were on the preceding elephant; me, my wife and 2 sons – one 4 and another babe in arms following on the second elephant. I spotted a slight movement at the 2 o’clock position and then suddenly a blur leaping at us. Oh My God!!, was our involuntary exclamation. Even today, thinking of it, we shudder but recollect with admiration the charming grace, agility, gymnastic acumen and sterling performance of the Tiger.

It was certainly a case of love at first fright! Search your heart…what comes to your mind when you think of Tigers?

Any positive thoughts at all?

Why are Tigers extremely important to our planet and people?

My father-in-law, Vivek Ranjan Sinha –now 94+, is a very well-known conservationist, award winning photographer and author of two books. He initiated my wife and me into love the for wild-life, national parks, sanctuaries and conservation. He took a lot of time and effort including several field trips to explain and illustrate what he calls as “The Law of the Jungle” and the Tiger’s role therein.

“The tiger is a unique animal which plays a pivotal role in the health and diversity of an ecosystem. It is a top predator which is at the apex of the food chain and keeps the population of wild ungulates in check, thereby maintaining the balance between prey herbivores and the vegetation upon which they feed. Therefore, the presence of tigers in the forest is an indicator of the well-being of the ecosystem. The extinction of this top predator is an indication that its ecosystem is not sufficiently protected, and neither would it exist for long thereafter.” How well do we really know the Tiger? ….it is not a quiz but a random collection of titbits from the internet:* Abhishek Gurung. To re-emphasize – Tiger is a symbol of our National Pride This is what India.gov.in has to say about our National Animal: “The magnificent tiger, panthera tigris is a striped animal. It has a thick yellow coat of fur with dark stripes. The combination of grace, strength, agility and enormous power has earned the tiger its pride of place as the national animal of India. Out of eight races of the species known, the Indian race, the Royal Bengal Tiger, is found throughout the country except in the north-western region and also in the neighbouring countries, Nepal, Bhutan and Bangladesh”.

What are the current efforts being made to save the tiger?

India is home to 70 per cent of global tiger population. Therefore, the country has an important role to play in tiger conservation. The Government of India started ‘Project Tiger’ in 1972 with a view to conserving the animal. As part of this project initially nine core buffer areas for maintaining tiger population were notified, which keeps getting expanded aptly facilitated by The National Tiger Conservation Authority.

How to Track a Tiger? “Elementary, my dear Watson, just allow it to track you” In almost all National Parks, Tiger Reserves, Sanctuaries you have these two types of vehicles that are permitted for safaris:

It goes without saying that Jeeps with lesser tourists are better but keep your fingers crossed that your co-travellers are genuinely interested in wildlife and you don’t have young children or ‘adults who behave as children’. But then, normally the Canters are sent to the most ‘likely zones’…simple logic…more people can see, if there is a sighting.

Why this clamour to see me? Why am I always under observation?

I am no celebrity – no politician, no world leader, no hero / heroine…. not even a villain!  Yet people surround me; block my path, aim some funny things at me and that too in my very own home and backyard! Except for nights and  jungle closures, I have to be always alert and put my best foot forward!! Thank God for small mercies like this.

*Shiv as he is popularly called is an intrepid traveler, road trekker, adventure and wildlife enthusiast, and a keen photographer. He and his wife Mukta as navigator, have self-driven more than 104,000 Kilometers on Indian Roads as a part of Khoj India Series 1 to 6. He has 37+ years of management consulting and people development.

©All photo/video credits, unless mentioned otherwise belong to P. Shivanand