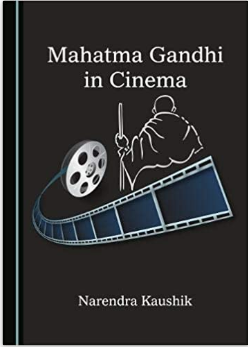 “The first major attempt to decipher Mahatma Gandhi’s life through a biopic was made in 1968 when the Gandhi National Memorial Fund, in cooperation with the Films Division, produced a five-hour documentary called Mahatma: Life of Gandhi on the great man. The film contained animation, live photography and old prints to provide an integrated image of his life. The story itself is mostly narrated using Gandhi’s own words.

There was a lull for close to a decade and a half after this. From 1960 to 1980, Hindi cinema seemed to have forgotten about the proponent of peace. Rachel Dwyer, a professor of Indian Cultures and Cinema at School of Oriental and African Studies (SOAS) in University of London, was intrigued by “the case of the missing Gandhi in Indian Cinema”.

Dwyer, who has written extensively on Hindi cinema, claims in a book Filming the Gods: Religion and Indian Cinema that Richard Attenborough’s Gandhi remains the only introduction for many young Indians to the “father of the nation”. Apart from the documentary Mahatma: Life of Gandhi, she may not be factually incorrect.

It is a fact that there are only a few films about Gandhi and his role in the freedom struggle made in Indian languages. Yet, Gandhi’s moral ethos served as a guide, spiritual light, source of self-identification and a strong sense of patriotism in many of the films between the 1950s and the 1980s, like Nashtik (1983), Do Aankhen Barah Haath (1957), Naya Daur (1957), Mother India (1957) …. all set in pre-independence or post-partition period, but none of the films directly represented him.

There could be two reasons why Hindi filmmakers have kept away from Mahatma Gandhi and, to a greater extent, other icons of the First Indian War of Independence in 1857 and the country’s subsequent freedom struggle.

Firstly, there is no guarantee that such films would succeed. In fact, many of the ones filmed between 1940 and 1955, including Veeangana (1946), Maharani Jhansi (1952), Jhansi Ki Rani (1953), and Shaheed-e-Azam Bhagat Singh, failed to score at the box office. The first three, directed by Nandlal Jaswantlal, Jagdish Gautam and Sohrab Modi, respectively, told the story of Jhansi queen Laxmibai while the fourth was Gautam’s first attempt to put the young revolutionary Bhagat Singh on the big screen. Modi’s wife Mehtab played Rani Jhansi in the film. Jhansi Ki Rani was released in English as The Tiger and the Flame after dubbing and partial editing in English.

Secondly, historical films more often than not are very expensive to produce and create controversy, something Hindi filmmakers wanted to avoid after the failure of the four above-mentioned movies and the controversy over Jhansi Ki Rani. Sanjit Narwekar, writer and filmmaker, says

The box-office failure of Modi’s magnum opus seems to have put an end to other films on the freedom struggle. Also, Hindi filmmakers began to shy away from such films because of the inevitable controversy it (Jhansi Ki Rani) raised.

Modi spared no money or effort filming his magnum opus. It was the first film shot in Technicolour in India, and Modi hired Hollywood colour consultant George Jenkins and Oscar-winning American cinematographer Ernest Haller (of Gone with the Wind and The Flame of the Arrow fame) to shoot it.

“In those days, it cost something like a crore. Even if everybody in India had seen the film, it would not have made its money back,” says Mehelli Modi, the director’s son, who runs the Second Run DVD label for arthouse films in London. The film’s failure proved to be a major financial disaster for Sohrab Modi and his Minerva Movietone. Prime Minister Jawaharlal Nehru obliquely pointed towards this in his statement in Rajya Sabha in December 1963.

The production of a film on the life of Gandhiji was too difficult a proposition for a Government department to take up. The Government was not fit to do this and they had not got competent people to do it.

This was also the year when Nine Hours to Rama, a British film based on Stanley Wolpert’s book by the same name, a fictional account of the nine hours before Gandhi’s assassination, was released. The narrative spans nine hours in the life of Mahatma’s killer, Nathuram Godse.

In 1982, Richard Attenborough finally completed his dream project, a film on Gandhi. The biographical film won eight Oscars, including best director for Attenborough and best actor for Ben Kingsley, alias Krishna Bhanji, a man born to an Indian doctor and an English model, who portrayed the character of Gandhi. Kingsley’s ancestors reportedly lived in the same village where Gandhi was born.”

*Dr. Narendra Kaushik is an Associate Professor of Mass Communication at JECRC University, India. He conducted his doctoral studies on Gandhian principles in Hindi Cinema