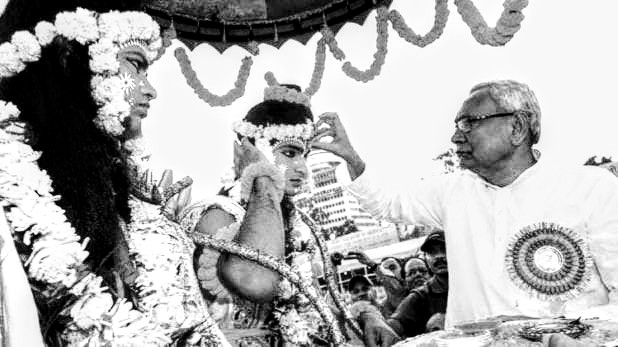 Patna: Political churning is at full throttle in Bihar as the Bharatiya Janata Party today gave short shrift to chief minister Nitish Kumar by not participating in Dusshera celebration at historic Gandhi Maidan here.No BJP leader was present at the function.

For quite some time now the BJP and its ally in the National Democratic Alliance (NDA) run state government, the Janata Dal (United) are at loggerheads with each other and their differences have been aggravated after the state government’s mismanagement of recent deluge in the state capital. Even Gandhi Maidan had turned into a big lake last week because of heavy rains and it was with great efforts that the effigies of Ravana, Kumbh karna and Meghanad were set up for Dussehra rituals at the very last minute here.

The BJP has not come out with any clarification why it decided to opt out from the function. This has created further uncertainty in NDA camp. The chairs meant for BJP leaders remained vacant at the function.

Chief Minister Kumar was flanked by state Congress president Madan Mohan Jha and Bihar Assembly Speaker Vijay Kumar Chaudhary. Most surprisingly, Nitish Kumar’s deputy Sushil Kumar Modi also abstained from the function. Union Minister and BJP MP from Patna Sahib Ravi Shankar Prasad said he had made his decision not to celebrate Dussehra much before as he was very much pained over  problem of water logging faced by residents of his constituency following incessant rainfall.

Lapping the opportunity to attack NDA in backdrop of absence of BJP leaders in Dusshera function, the Opposition Rashtriya Janata Dal vice president Shivanand Tiwari said it was a well thought strategy of the BJP to undermine the JD (U). He also ridiculed the BJP leaders by saying they did not gather courage to face people following long stretched water logging as the party leaders were at the helm of affairs in the state capital as MPs and MLAs from capital’s constituencies