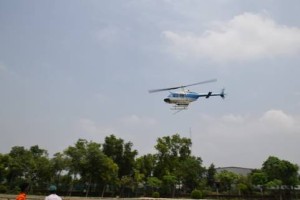 Greater Noida: Along with drones, the government on Tuesday pressed a helicopter into service to fight the locust menace that has spread to nine states.  Union Agriculture & Farmers’ Welfare Minister  Narendra Singh Tomar flagged off a single-pilot Bell 206-B3 Helicopter with spray equipment from a helipad facility here, which has been  deployed for locust control in desert areas of Barmer, Jaisalmer, Bikaner, Jodhpur and Nagaur.

The Bell helicopter had a pesticide carrying capacity of 250 litres in one trip and could cover about 25 to 50 hectare area in one flight. An Empowered Committee finalized the firm for deploying one helicopter for aerial spray in desert area after getting all the clearances from DGCA and Ministry of Civil Aviation.

Tomar informed that order had been placed for 5 numbers of aerial spraying machines from a UK-based company, and  once these were received, they would be deployed in IAF helicopters and pressed into operation for locust control.

Tomar said that while last year the locust attack had taken place after a long gap of 26 years, it was already estimated that this year there would be greater locust problem. “Government is in full preparedness and all the State Governments have been alerted and are working in close coordination with the Centre,” he said. He added that deployment of machines, vehicles and manpower had been increased and concerned states were utilizing State Disaster Relief Funds to tackle the problem.

Drones are considered effective for tall trees and inaccessible areas. One drone can cover 16-17 hectare area in one hour and in 4 hours it can cover upto 70 hectare area. The Ministry of Civil Aviation had relaxed the terms and conditions of the conditional exemption granted for drone in anti-locust operations and permitted the use of engine-powered drones upto 50kg and use of drones during night times also for anti locust operations.

The Ministry of Agriculture & Farmers Welfare further said that at present the major strategy of locust control was through 60 control teams with spray equipment mounted vehicles and more than 200 Central Government personnel were engaged in such operations in states of Rajasthan, Madhya Pradesh, Punjab, Gujarat, Maharashtra, Chhattisgarh, Haryana, Uttar Pradesh and Bihar. It further informed that state governments had undertaken control operations deploying tractor mounted sprayers and fire tender vehicles. “Starting from 11th April, 2020 till 28th June, 2020, control operations have been done in 2,33,487 hectares in States of Rajasthan, Madhya Pradesh, Punjab, Gujarat, Uttar Pradesh, Maharashtra Chhattisgarh, Haryana and Bihar. No significant crop losses have been reported in the States of Gujarat, Uttar Pradesh, Madhya Pradesh, Maharashtra, Chhattisgarh, Bihar and Haryana. However, some minor crop losses have been reported in some districts of Rajasthan,” the ministry stated.

“For effective control of locust beyond Scheduled Desert Areas, temporary control camps of LCOs have been established in Jaipur, Ajmer in Rajasthan, Shivpur in Madhya Pradesh, Fazilka in Punjab and Jhansi in Uttar Pradesh,” the ministry stated.