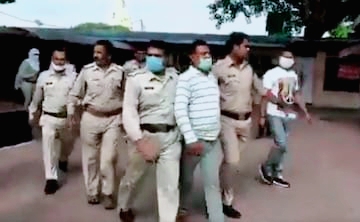 Ujjain: After seven days of massive hunt in several states, the police  on Thursday finally got hold of elusive gangster Vikas Dubey here on Thursday. The dreaded gangster was playing hide and seek with the police after he and his gang killed 8 cops  including a Deputy Superintendent of Police (DSP), at his native Bikru village in Chaubeypur block of Kanpur on July 3. Seven police personnel were left injured in that attack.

Dube was arrested after a security guard at the famous Mahakaal Temple, where the latter had arrived to offer prayers using a VIP pass, identified him and alerted the police.  Following the guard’s call the Superintendent of Police of Ujjain, Manoj Singh, arrived at the Mahakaal Temple with a large force and the wanted criminal could be taken into custody almost 150 hours after the dreaded gangster and his henchmen had fled the scene after killing eight Uttar Pradesh policemen.

Earlier on Thursday morning, in a joint operation, the UP Police and Special Task Force shot dead a close aide of Vikas identified as Praveen alias Bauva Dubey in Etawah. Bauva carried a reward of Rs 50,000 on his head and was one of the accused in the ambush and killing of policemen.

Police was on its toes ever since the gruesome killings and was tracking all evidence in a bid to reach Vikas. UP’s Director-General of Police (DGP) Hitesh Chandra Awasthy had raised an alarm for Dubey’s arrest across all 75 state districts.  Additionally, a bounty of Rs 1 lakh was announced on his head , which was further  increased to Rs 2.5 lakh, along with the affirmation that the tipster’s identity will not be disclosed. Across the state, fifty dedicated teams and more than 3,000 police officers were mobilized to apprehend him in a major manhunt but his whereabouts are still unknown.

It was on Wednesday that the police  found that Vikas had left his relative’s house in Faridabad. A few hours later, the Haryana police arrested three alleged aides of Vikas Dubey in a raid and recovered CCTV footage from the hotel which confirmed presence of Vikas there. He was wearing a mask. The two aides of the gangster were identified as Ankur and Prabhat. One of the aides, Ankur had helped Vikas hide in Faridabad.  Prabhat was said to be from his village. In yet another development, another close aide of Vikas  identified as Prabhat Mishra was killed by Uttar Pradesh police in an encounter near Kanpur, when he tried to escape from the police custody after he  was arrested by Haryana Police on Wednesday (July 8) and was being brought to Uttar Pradesh on a transit remand for further interrogation.

The policemen killed by Vikas and his gang had gone to arrest him in Bikhru village. Around 15-20 goons armed with semi-automatic weapons like AK-47 fired at the unprotected policemen, who were blinded by lights, killing 8 policemen and injuring 7 others. Significant details could be collected after investigating Daya Shankar Agnihotri, Dubey’s domestic help and close aide who was arrested on July 5, that the gangster had received information about the raid five hours in advance. Hence, his henchmen were armed, and were waiting for the police and had even placed a JCB machine on the road to block the police vehicle.  Reports suggest that the police raid was a result of  a  dispute between the Vikas and his brother-in-law, Rahul Tiwari over a few acres of gram panchayat land at Bikhru village. Reportedly  a day before the raid, Tiwari had sought to make a complaint against Vikas but  Chaubeypur Station House Officer (SHO) Vinay Tewari had allegedly refused to file an FIR against Vikas. He also decamped when Circle Officer, Devendra Mishra took action and filed the FIR. On investigation, it was later found that Tewari had gone to Vikas to inform him of the goings-on where he was beaten up by Vikas’s  goons. Subsequently Tewari, along with four other policemen, were suspended and  were being questioned. However, Kanpur Senior Police Superintendent (SSP) Dinesh Kumar in a press briefing stated that SHO Tewari ordered for the electricity to be cut off to protect the police squad from the aggressive assault.