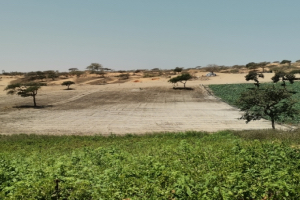 Dakar: Now in her fifties, Binta Ba worked for many years in Senegal as a merchant before using her savings to buy some land and turning to her passion for gardening to launch a new career. She started off using traditional methods to cultivate her fields, but the results were disappointing.

“Doing things in a conventional way, we thought we could save money, get our produce out quicker and take advantage of competitive prices. But when you take into account the amount of water and labour you need, the gradual loss of biodiversity around the fields and the rapid degradation of soils, you realize that intensive agriculture often costs more than the return on investment,” she says.

Today, however, Binta is helping to lead a quiet green revolution in the fields of Mboro, where she lives. In this coastal region of Niayes, close to Senegal’s capital Dakar, she is training her fellow growers in agroecology, an integrated approach applying ecological and social concepts to sustainable agriculture, which turns a lot of conventional farming wisdom on its head.

The dramatic change came after she was offered the chance to be one of 16 producers selected for a pilot using agroecological practices in the Niayes area. With the support of FAO and local nongovernment organization, Environment Development Action for the Natural Protection of Lands, or ENDA Pronat, Binta received seeds, irrigation equipment and fertilized trees. She was trained in practices such as composting and bokashi, a process for making food waste ferment using special bacterial inputs. Instead of using chemical fertilizer on her fields, these practices both helped to preserve biodiversity and prevent the soil from being overworked. They have also reduced the need for intensive labour on the crops, freeing up more time for Binta to pursue other activities.

The initiative is part of a long-term process supported by FAO and several governmental and non-governmental partners to promote reforms to the land tenure structures, traditionally based on customary law, that have dominated this West African nation.

As the implementation of the global Voluntary Guidelines on the Responsible Governance of Tenure of Land, Fisheries and Forests in the Context of National Food Security (VGGT) has filtered down to the local level in this region, they have also catalysed a raft of interlinked moves for change. The project promotes a joint approach to land tenure security and land development. Its key points are not just agroecology, but also work on broader sustainable agricultural development and mitigating soil degradation.

Binta has already planted two hectares of land with organic potatoes and has built up a seed reserve for next season. She has already been contacted by other producers in her commune and beyond, wanting to be trained and to join the project to reduce the use of chemicals and increase the value of their lands. She has thus become a trainer of farmers spreading knowledge of agroecological practices in the Niayes area.

It all starts with land

Driving all this has been the VGGT process in Senegal starting in 2014, which has seen the setting up of multi-stakeholder dialogue platforms to help implement change on land tenure at a national level and also at the local level in five areas including Binta’s home region of Niayes. The main aim is to bring stakeholders together for dialogue on updating land tenure laws. The initiative has actively promoted communities’ understanding of the laws, organised workshops to help local actors improve governance of land tenure and recognise communities’ rights to make decisions about their land. The increased security that land tenure provides is an additional factor encouraging farmers to invest in their lands and sustainable land management. That’s where agroecology comes in.

Given Senegal’s rapidly growing population and pressure on land, “whether it is herders or farmers, everyone today is aware of the importance of the management of natural resources and especially of land tenure. All partners must help populations to preserve their land resources because their survival depends on it,” says Yero Sow, Mayor of Ouarkokh Commune in northwestern Senegal.

Another critical aspect of the progress on land tenure and the initiatives growing out of it is the empowerment of women. Despite a constitutional provision granting women equal access to land ownership, cultural and customary practices make this difficult to achieve in practice. So raising awareness of the issue and helping women negotiate their rights has been a particular focus for FAO and its partners.

“The project helped empower women across the region. When women have more access to land, they contribute more to decisions about family farms. They know their rights and duties better, and now the heads of households consult with them for rural activities and to make decisions related to the household,” says Dieynaba Diallo, President of the Women Promotion Group, Kawral Sinthiou Sambarou. “Women also now have more access to decision-making bodies. For example, some have actively joined municipal councils. Others have become presidents of producers’ organizations.”

Binta has served as a role model for others, proving that farmers embrace productive and sustainable farming practices when they have access to the land. Though the country has yet to finalize its new land policy, the progress made on the ground by Binta and her trainees is just one aspect of the experience in Senegal that can be shared with other countries, demonstrating the results of the FAO-supported VGGT process towards a more sustainable and inclusive rural transformation.