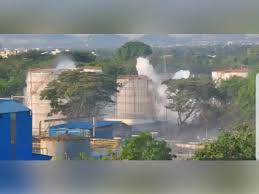 Visakhapatnam:  I got the message at 4.45 am about this serious leakage of Styrene Gas (vapour) at the site of LG Polymers in Visakhapatnam. Around 400-500 people upto 3km radius of the plant,  especially women, children and animals were exposed to this Styrene gas. They had either fallen seriously ill or died.  Animals were left unattended and people were being evacuated to different hospitals in the city by National Disaster Response Force, who were already present there to attend Covid-19 victims in case of emergency.

We are fortunate that such a ghastly accident couldn’t damage much as the district administration is on standby for COVID operations. Some important aspects of this accident that came to my notice  are: