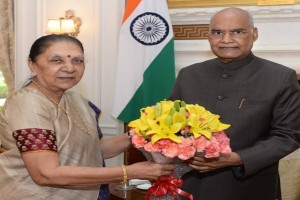 New Delhi: Uttar Pradesh Governor Anandiben Patel has been told to discharge the functions of the Governor of Madhya Pradesh, in addition to her own duties, during the absence of MP Governor Lal Ji Tandon, a Rashtrapati Bhawan press communique stated here on Monday.

The health of  Tandon, who is undergoing treatment in Lucknow Medanta Hospital was constantly improving, media reports quoting Dr. Rakesh Kapoor, Medical Superintendent of Lucknow Medanta Hospital, stated on Monday. His ventilator support was being gradually reduced and now his kidney, liver and heart were functioning normally.

Tandon was admitted to the hospital following  fever with urine problem on June 11. He had to undergo an emergency operation following complications in liver.