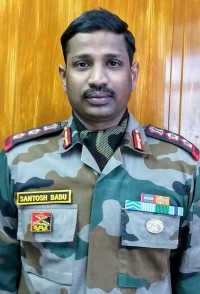 New Delhi: An Indian Army officer Colonel Santosh Babu, commanding officer of the 16 Bihar regiment, and two jawans, Havildar K. Palani, and Havildar Sunil Kumar were martyred in a violent face-off with Chinese soldiers in Galwan valley area in Eastern Ladakh on Monday night, army sources said here on Tuesday. These are the first fatalities on the Sino-India borders since 1975, informed sources said.

“India and China have been discussing through military and diplomatic channels the de-escalation of the situation in the border area in Eastern Ladakh.

Senior Commanders had a productive meeting on 6th June 2020 and agreed on a process for such de-escalation. Subsequently, ground commanders had a series of meetings to implement the consensus reached at a higher level.

While it was our expectation that this would unfold smoothly, the Chinese side departed from the consensus to respect the Line of Actual Control (LAC) in the Galwan Valley.

On the late-evening and night of 15th June, 2020 a violent face-off happened as a result of an attempt by the Chinese side to unilaterally change the status quo there. Both sides suffered casualties that could have been avoided had the agreement at the higher level been scrupulously followed by the Chinese side.

Given its responsible approach to border management, India is very clear that all its activities are always within the Indian side of the LAC. We expect the same of the Chinese side.

We remain firmly convinced of the need for the maintenance of peace and tranquillity in the border areas and the resolution of differences through dialogue. At the same time, we are also strongly committed to ensuring India’s sovereignty and territorial integrity.”

The Army said there were casualties on the Chinese side as well. “During the de-escalation process underway in the Galwan Valley, a violent face-off took place yesterday night with casualties on both sides. The loss of lives on the Indian side includes an officer and two soldiers,” the Indian Army said in an amended statement on Tuesday afternoon. The Army also said “senior military officials of the two sides are currently meeting at the venue to defuse the situation”.

Targeting Prime Minister Narendra Modi with a hashtag #WeakestPMModi, the Congress Party, tweeted: “Will the PM tell the nation how his government plans to meet this challenging situation which has serious ramifications for India’s ‘national security and territorial integrity’?” In another tweet, it said: “Our brave army personnel have been martyred & as our nation mourns this loss, our govt stands idly by & refuses to answer pertinent questions. PM Modi & Defence Minister must break their silence.”