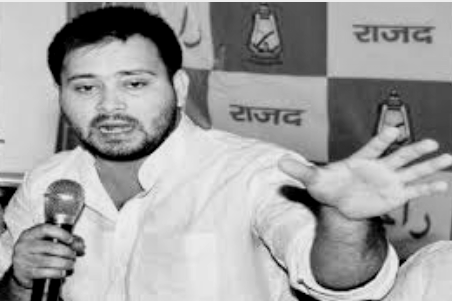 Patna: Leader of Opposition in Bihar Assembly and Rashtriya Janata Dal leader, Tejashwi Yadav, on Thursday extended his party’s full support to Nitish government in its fight against Covid-19 spread as “only united Bihar would defeat Corona” but simultaneously attacked chief minister Nitish Kumar through his ‘political inneundo’.

Making a statement on the social media, Yadav said, “Remember, it’s a marathon and therefore a comprehensive and forethought action plan is required. We as a responsible opposition are ever ready to offer any help whatsoever sought from us. A united Bihar will defeat Corona.”

Opening his statement by making a sarcastic remark on CM, he said, “Thank you, honourable Nitish Kumar Ji, you finally chose to address Bihar on 18th day whilst other CMs have repeatedly addressed their people. Bihar was anxiously waiting to hear from you on the alertness, awareness and preparedness thus far made by the state government on social, economic and healthcare fronts. But to Bihar’s disappointment, these were vaguely addressed in your speech.”

He also accused Nitish of not updating on the stockpile/procurement of testing kits, PPE, masks, ventilators, ICU beds, gloves, sanitisers which doctors, first responders and all others had been demanding from day one.

“We are lowest in testing whereas testing alone is the first step to contain the spread,” he added.

“Bihar CM said 3000 calls were received by control rooms setup by the govt with 40 teams. Just a perspective on the seriousness and intent of the govt to help”, Yadav quoted Nitish as saying and also also took a dig at CM in same breath.

“Our office attended over 4000calls in last 5 days and arranged food/ration and helped thousands of Bihari’s stranded across the country,” he claimed.

“We are helping migrants by co- ordinating with respective state governments, volunteers and personal contacts which primarily should have been done by Bihar government. Upon arrival back home on their own, migrants were mistreated by police, hauled up like animals, ferried in garbage carrying trucks, he alleged.

“I once again request Bihar CM to expedite the containment measures by ramping up medical capacity, testing more people, slowing the rate of infection in the buy-out time till 14th April. Lockdowns coupled with these efforts is what it will take to get us through this battle”, he added.

1 thought on “Tejashwi stresses on unity in fight against Covid-19, attacks Nitish”