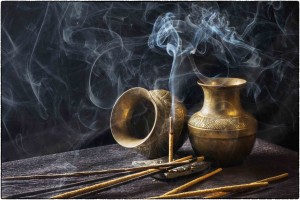 Then, where is the sin?

When we analyze any person, when we try to understand that person, we will find that there are two elements in everyone: one element is puruṣa and another one is prakṛti. Puruṣa means the consciousness element that is nitya śuddha (ever pure), buddha (wise), mukta (free) by nature. It resides in a ‘puri’ (town) that is in the form of the body and therefore, it is called puruṣa. Second element is prakṛti. Prakṛti is made of three guṇas (attributes): sattva, rajas, tamas. Pāpa and puṇya, virtues and vices, all this fall under prakṛti.

When one’s mind or prakṛti is sātvika, he is virtuous. When one’s mind is primarily occupied by rajoguṇa, he has restlessness, activity, greed, pride, ego etc. and when there is predominance of tamoguṇa in one, he has hatred, jealousy, anger, violence, cruelty etc. Thus, cruelty, greed, delusion, virtues, selfishness, selflessness, all of this is in prakṛti. The sinfulness of the one who we call sinner is a guṇa of his prakṛti. And the virtuousness or the saintliness of a person is also in his prakṛti. Every animal has different prakṛti because the constitution of the guṇas in each animal is different. However, the puruṣa residing everywhere in this prakṛti is one only. Prakṛti is a role of puruṣa. If we only give the reality to prakṛti, only look at the role, positive or negative reactions arise. In reality, the puruṣa wearing the costume of prakṛti is satya (real). If we make a note of that, the mind will remain free of such reactions. By worshiping such omniscient īśvara with his karma, one achieves purification of antaḥkaraṇa (mind).

Thus, Bhagavāna showed a solution of purifying antaḥkaraṇa, continuous service to īśvara, Nārāyana, residing in all the roles. That Nārāyana only is present in different forms in front of me. Therefore, any small or big karma that I perform with an attitude of offering it to Nārāyana is called karmayoga. In Gītā, Bhagavāna refers to karmayoga as yajña. Bhagavāna is saying that all the elements in the universe are performing yajña. The paṅca mahābhūta (Pṛthvī (earth), jaḻa (water), agni (fire), vāyu (air), ākāśa (space)) and sun, moon, constellations in the form of universe are serving īśvara. For whom air blows, water flows, sun illumines, trees give fruits? Trees never eat their own fruits. Trees give fruits for serving others, water flows to serve others and sun also illuminates to serve others. In this manner, except for human beings, if we see elsewhere, we realize that there is a universal yajña going on in the world. All the elements in the universe are surrendering themselves into this yajña. All the elements are surrendered to īśvara.

There is a mantra in Kaṭhopaniṣada:

Vāmanadeva, paramātmā resides in each body. While being there, he takes the prāṇa upward and pushes apāna downward. Meaning, He is continuously operating our inhalation-exhalation process because of which we can stay alive, our karmendriya, jñānendriya become capable to do their functions and our life remains in order. In the middle of the body, in the heart, paramātmā resides because of whom all the processes of the body are going on and devatās are worshipping this paramātmā.